NBC this Tuesday night invited you to a land down under — meaning, far beneath Los Angeles — with La Brea. Did the sinkhole drama suck you in?

La Brea stars Natalie Zea (Justified) as Eve Harris, an office manager and mom who was motoring past the La Brea Tar Pits & Museum with daughter Izzy (played by Zyra Gorecki) and son Josh (Jack Martin) when a massive sinkhole began forming at an intersection, first gulping down a startled traffic cop and then spreading to rip the Earth from beneath many buildings and cars. After first driving away backwards down a sidewalk (!), Eve and the kids got out and made a run for it, but when Josh got knocked down by the stampede, Eve doubled back . As such, the both of them fell into the sinkhole, despite Izzy’s best efforts to pull their mom to safety.

Coming to after safely landing… somewhere… Eve looked for Josh amid a sprawling expanse of trees, fields and hills. First, she bumped into a man we’d come to know as Ty (Chiké Okonkwo), who was holding a gun (for reasons revealed later). Their meeting was cut short when Eve saw smoke in the distance, and raced over to a clearing to find Josh and many others, plus vehicles, street signs, building parts, etc. There, as people tried to make any sense of what happened/where they were, we met stoner Scott (Rohan Mirchandaney)… teenage Riley (Veronica St. Clair) and her doctor/former SEAL dad Sam (Jon Seda)… and protein bar-hogging police officer Marybeth (Karina Logue). 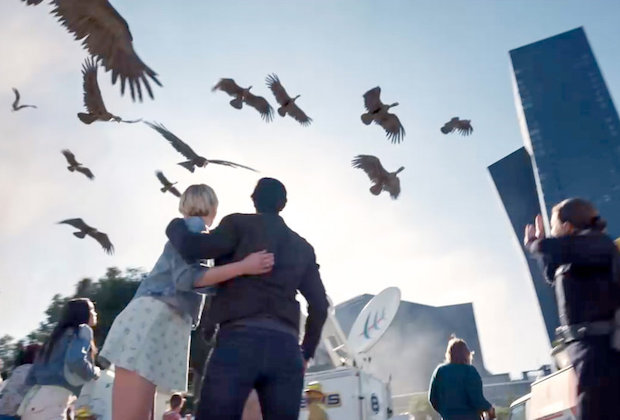 Josh and Izzy’s father, Gavin (The Night Shift‘s Eoin Macken), has called in a favor to get a pre-interview at the Air Force Base in El Segundo — wanting to be close to his kids, he explains, who recently moved to L.A. Thing is, Gavin’s 20-year career as a pilot unceremoniously ended when, following a crash in the desert, he began “seeing things.” Just as Gavin exits the meeting, the news breaks about the sinkhole, which Gavin heads out to after a panicked Izzy calls him. Apparently able to get within a reasonable distance of this L.A. traffic-jamming natural disaster (!) and after easily scooting past barricades and a cop (!!), Gavin finds and hugs Izzy — just as a flock of large, menacing birds flies out of the sinkhole. We and Gavin had seen this type of bird, before, in one of his headache-y “visions.”

Dr. Sophia Nathan from Homeland Security gives a presser nearby the sinkhole, saying that there is no hope of finding survivors of such a fall. (Afterwards, she scoffs to an associate that she was not about to reveal the “truth” about what has happened.)  Gavin, coming off a new “vision” in which he saw Eve and Josh in the same area as the primeval bird, insists to Dr. Nathan that there are survivors. When he later recites the tailfin number of the drone that DHS piloted into the aurora borealis (but eventually crashed inside the sinkhole), Nathan pretends not to be convinced, but privately nudges an Agent Markman to get the 411 on this man.

Later, determined to prove his theory, Gavin finds an old photo of him and Eve at the large rock from his vision, one with a handprint symbol on it. He then drives out to said rock and begins digging. And just as Izzy and her Aunt Jessica (Ione Skye) arrive to ask what the heck he is up to, Gavin unearths the wedding ring necklace that Eve always wears, but lost during her tumble into the sinkhole!

While rummaging for supplies, Riley and Scott discover bricks of heroin inside one car’s trunk. Eve and Josh, meanwhile, have just busted Marybeth for hoarding protein bars when a growling dire wolf shows up. They bolt for camp, where a second wolf appears. As everyone races for cover, Scott zones out when Riley begs him to let her inside a car, so she instead scrambles underneath. One wolf tackles and nips at Josh, before Ty uses his gun to put down the beast. Sam tends to badly wounded Josh the best he can inside an inverted bus, but he needs antibiotics, needles and other supplies. Eve remembers seeing an ambulance fall into the sinkhole, so as it gets dark (don’t get me started on Hollow Earth “sunsets”) — and with help from suicidal Ty — they locate the vehicle a mile or so away. As they do, Eve regards the silhouette of the Hollywood Hills in the ambulance’s logo… and realizes it matches the hills in the distance. “I think we’re still in Los Angeles,” she surmises — just as a sabre tooth tiger confronts them! 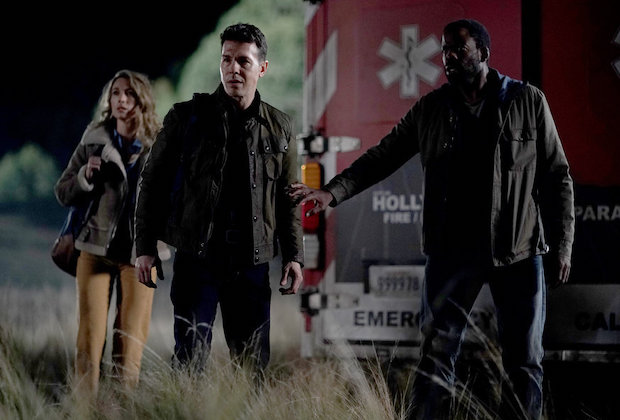 As Eve indicated in the closing seconds, “We run,” Natalie Zea previews for TVLine. “We had already seen the wolves [that attacked the camp], but the sabre tooth is the first time that they encounter an animal that has long been extinct. That’s when the ‘We’re not in Kansas anymore’ moment really solidifies.”

Speaking of “Not Kansas,” how is that Eve, Josh, Sam et al apparently landed so gingerly on the ground, after tumbling into the deep, deep sinkhole?

Presented with that burning question, Zea shared, “The cast has a theory! But it may be a spoiler. But yes, we had asked about the criteria for survival, because not everybody who falls into the hole makes it…. We have some theories, but I don’t know that they’re accurate — and I think it may be up to the audience to decide.”

Want scoop on La Brea? Email InsideLine@tvline.com and your question may be answered via Matt’s Inside Line.