“Where am I going to go for Christmas now?” wondered Ariana Grande after getting into a playful tiff with self-appointed grandpa Blake Shelton during Monday’s episode of The Voice. And more importantly, which of Night 3’s Blind Auditions made not only them but John Legend and Kelly Clarkson hear stars? Read on, and we’ll discuss the country boy whose mere mention of fiddling turned John into “a very fiddle-friendly coach,” the former contestant’s sister who was taking her turn in the spotlight and the mother of two whose unique look the panelists thought wasn’t half as memorable as her “Rocket Man” cover. And those are just for starters!

Raquel Trinidad (Team Ariana), “I Wish” — Grade: C | When she hit the stage, this free-spirited Floridian, who once did singing voiceovers for a Dora the Explorer special, delivered a rendition of Stevie Wonder’s classic that was funky and fun… yet more immediately forgettable than that three-chair turn implies. “Your voice is like a breath of fresh air,” Ariana told Raquel. And maybe it was, I just wanted the contestant, who clearly can sing, to take a bigger lungful and really show off why she should be a contender.

The Joy Reunion (Team Blake), “Boondocks” — Grade: A | This trio, whose name is inspired by their ability to shake off the music biz’s rejections to reclaim their love of playing, sounded as shiny and polished on their Little Big Town cover as a cowboy’s brand-new belt buckle. There was no tentativeness with them, this was just three “chosen family” members up there doing what they know dang well they do fantastically. It could’ve been the opening number of their concert or the closing one, they’d have nailed it with just as much gusto.

Hailey Mia (Team Ariana), “You Broke Me First” — Grade: A | What was especially impressive about this personable 13-year-old Jersey girl’s spot-on take on Tate McRae wasn’t the way she navigated that tricky melody or the strength of her vocal — although those were pretty damn good, too. It was the emotion that the two-chair turn packed into her performance; you’d have sworn that she was twice her age, so credibly did she capture the song’s pathos. 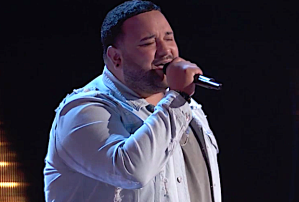 Jeremy Rosado (Team Kelly), “Here Comes Goodbye” — Grade: B | This 29-year-old, who’s sweetly raising his niece as his daughter, admitted before his tryout that he isn’t a country artist, he just likes making songs his own. Big gamble, but his soulful take on Rascal Flatts paid off, earning him chair turns from both Blake and Kelly, who noted that there were moments of his performance that made her go, “Hmm” — and not in a good way. In the end, though, she — like most of us, no? — was won over by that voice, an instrument so massive, it could’ve filled a stadium.

Carson Peters (Team Blake), “Tulsa Time” — Grade: B+ | Though this 17-year-old Tennesseean didn’t demonstrate the kind of range or showmanship that really makes ya go, “Whee doggie, now that’s a contender!” the fiddler sounded solid, well-modulated and authentically country enough to get a four-chair turn (as well as inspire John to declare himself a “very fiddle-friendly coach”). As an added bonus, Carson managed to avoid the deer-in-headlights look that so often bedeviled Season 20’s similarly likable Avery Roberson.

Keilah Grace (Team Legend), “Never Tear Us Apart” — Grade: A- | Wow. This 15-year-old dynamo didn’t need a spotlight on her, she freakin’ glowed just from the sheer power of her vocals on her INXS cover. Every time she had us thinking, “Nah, she can’t possibly go bigger,” she did. Was her audition perfect? No. But it was raw and passionate — what a growl she has! — and the three-chair turn’s voice has a tanginess that’s going to really make it stand out from her competitors. Can’t wait to hear her cover Amy Winehouse or (more) Paloma Faith. 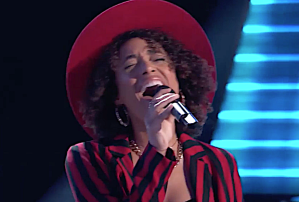 Samara Brown (Team Legend), “Sweet Thing” — Grade: B+ | The sister of Season 3’s Amanda Brown (before my time covering The Voice, but Wiki tells me she made it to the Top 6), Samara declared it “my time” before taking her place on stage. “And I am so ready.” That she was. There were what sounded to me like some wonky notes in there, but by and large, her Rufus and Chaka Khan cover was a thing of beauty, warm and confident and ultimately full of the kind of runs that make Ari’s eyes widen in awe.

Holly Forbes (Team TBD), “Rocket Man” — Grade: B | This Kentucky mother of two, bald since taking medication for seizures as a kid, turned out a rendition of Elton John’s hit that was at turns lovely and appealingly raucous. It was also occasionally sloppy and, for my money, not quite thrilling enough to have merited a four-chair turn (and inspired Ari to use her Block on John). Definitely the most memorable look of the night but not the most memorable voice.

So, which singer most impressed you Monday night? Vote for your favorite in the poll below, then hit the comments to back up your decision.