Resident Alien‘s Harry Vanderspeigle is about to meet his perfect match.

Alex Borstein (The Marvelous Mrs. Maisel) is heading to Patience, Colo., and we’ve got an exclusive first look at her guest-starring role on the Syfy hit.

In an upcoming episode of Season 2 (premiering in early 2022), Borstein will play Carlyn, Kate Hawthorne’s cousin from out of town. The “frizzy-haired, right-brained laser-physicist” has a great job working in a tech lab, though her love life is borderline non-existent. But when she rolls through Patience to visit her family and do some sightseeing, Carlyn homes in on someone strange: good ol’ Harry V.

“She has some odd mannerisms,” series creator and executive producer Chris Sheridan teases. “She’s socially awkward, similar to Harry, and she and Harry go on a date.”

There’s even a possibility Borstein could return, says Sheridan — if not in the back half of Season 2, then “hopefully” in the future.

“Watching her and Alan [Tudyk] together was very magical,” he says. “A lot of fun, a lot of improv, ad-libbing… I’ve known Alex for 20 years now, and I’m always amazed at how incredibly talented she is, in every way. She hit it out of the park.” 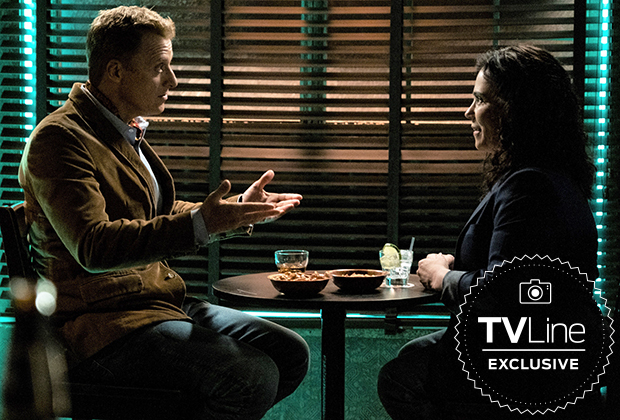 In other Season 2 news, Linda Hamilton (The Terminator) and Terry O’Quinn (Lost) are set to return for the sci-fi comedy’s sophomore run.

As for the series’ titular Harry, he’s going to have to deal with the fact that, even though he’s an extraterrestrial, he does have some humanity hidden deep beneath his green and scaly exterior. “He hates that,” says Sheridan, “so a large part of the season is going to be his struggle to come to terms with that fact. Season 2 leans into Harry learning empathy, and learning what it’s like to possibly care for other people outside of Asta.”

In addition, Harry and Asta (Sara Tomko) will go on a journey to search for an alien from his planet, which takes them all the way to New York City. Plus, the octopus character from Season 1 (voiced by Tudyk’s Firefly costar Nathan Fillion) will also be back.

Want more scoop on Resident Alien, or for any other show? Email InsideLine@tvline.com and your question may be answered via Matt’s Inside Line.