This week on NCIS, the proverbial band got back together to help “dead” Gibbs hunt a killer, while Gary Cole made his debut as a person of surprising interest.

Convening at Thelma and Virgil’s barn, which Jimmy somewhat unwittingly converted into a mirror of HQ (using bales of hay for desks), McGee, Torres and Knight met up with Gibbs to dive into the serial killer case and the latest discovered victim. Vance, having found Kasie at an otherwise vacant office, showed up at the barn not so much to shut down the off-book investigation, but to offer Gibbs his gun and badge back. Gibbs, though, respectfully declined and instead opted to keep playing “dead,” given that the terms for his reinstatement (an apology to the dog killer) would likely be the same.

Using the GPS on the latest victim’s running watch, the team found where the killer has been taking his targets, though the renter managed to elude capture. Working off a photo from the landlady, Kasie found the suspect on multiple street cams — and, it was realized, a strange, masked man was often in the background. That led to a stakeout, where Fornell quietly reunited with Gibbs inside his truck, and the two got to catching up on Tobias’ grief group, the “club” they now both belong to, Marcie, and whether Gibbs should be filling the void in his life with crimesolving. When the masked man surfaced, Torres gave chase and caught him (with help from McGee and Knight). 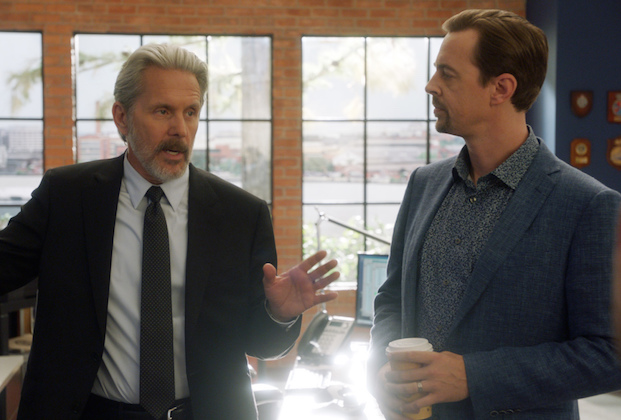 With his face and prints matching nothing on any database, the man proved to be most evasive in interrogation — until McGee threatened to plaster his face on the news, in connection with the serial killer case. That is when the POI revealed himself to be Alden Parker, an FBI Special Agent tracking the same killer.

Street cams again spotted prime suspect “Tommy,” but Gibbs got to him first, inside a columbarium. The men got into a scuffle, but Gibbs (though still wounded) gave as good as he got. After getting the upper hand in “Tommy,” Gibbs trained his gun on the man who had tried to blow him up, and it took many requests from his arriving NCIS pals to make Boss stand down. Afterwards, Gibbs paid Marcie a visit, only to see that, with the serial killer caught, she was heading out of town to a remote cabin with her friend “Mitch” — as in Michelle. Marcie gave Gibbs a warm hug goodbye, noting that she thought they worked well together.

At HQ, “Tommy” aka Paul Lemere held firm in his request for a (long-deceased) lawyer, while Kasie’s cracking of a thumb drive in his go bag revealed that he had been paid $50K after each kill, through a mysterious “NAVIS” corporation — meaning he was in fact a contract killer. Inside the interrogation room, Lemere nearly KO’d Knight by violently pinning her between the one-way glass and a shoved table, and then dove through the shattered glass to escape via the observation room. Torres gave chase through HQ, until Lemere grabbed Kasie and held a letter opener to her throat in the main room. Though several had their guns trained on skittish Lemere, the standoff came to an abrupt end when a shot rang out from Gibbs’ gun, as he emerged from the elevator — as Vance and Gibbs’ rather stunned team looked on.

What did you think of Gibbs’ “return” to the team, Marcie’s goodbye, and the introduction of Agent Parker?