Warning: This post contains spoilers from Dear White People’s final season. Read at your own risk.

Dear White People’s final season, which is now streaming on Netflix, is a fun and vibrant ‘90s musical extravaganza as Winchester’s finest tackle their senior year with iconic tunes from the decade.

There are many standout musical numbers in the show’s final 10 episodes, but we can’t stop thinking about Sam and Gabe’s breakup via NSYNC’s “Bye Bye Bye” in Episode 4. Maybe it’s the NSYNC fangirl coming out — raise your hand if you also read their fan fic on Angelfire back in the day — or that the show’s grungy take on the pop classic makes it feel brand new, but that song choice was spot on for the moment.

That’s why it comes as a surprise that series creator Justin Simien, who also served as showrunner, initially fought against including it before eventually caving. “I was not fully on board for it at first. It took a lot of convincing,” he tells TVLine. To be fair, he had a perfectly good reason for wanting to exclude it. 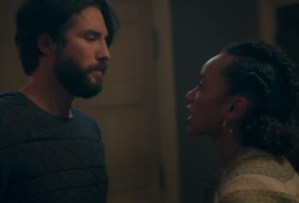 Although a catchy, chart-topping single, Simien notes that “Bye Bye Bye” is also “white people singing R&B, which is totally culturally appropriative.” The Dear White People boss was admittedly excited to hear that kind of sound coming out of pop music at the time, and thus really liked the lead single from the group’s sophomore album No Strings Attached. “As a Black person, it’s just one of those guilty faves,” Simien adds. “It’s one of those problematic faves.”

“We went through a lot of possible options there, and we kept coming back to ‘Bye Bye Bye,'” co-showrunner Jaclyn Moore says of the team’s relentless urging. “We kept being like, ‘Justin, what about now? We’ve gone through a lot of other choices.’”

It also helped that the edgier version chosen for the show — performed by Logan Browning and John Patrick Amedori — gave it a completely different feel. Plus, according to Simien, the writers found a “narrative reason to route it because Sam both enjoys certain aspects of her relationship with Gabe while she’s also embarrassed of them. Loving NSYNC is mutually one of those things, and it just was so clearly a brilliant choice that I just had to get out of the way of it at a certain point.”

Browning, who plays Sam, says she was excited for the chance to take on a childhood favorite. “I was living out my little girl dreams. That was incredible,” she shares.

Meanwhile, Amedori, who plays Gabe, never imagined he’d be performing the pop hit on the show. “I thought I’d be singing The Cure covers, like a remake of ‘Valley Girls’ before I would be doing ‘Bye Bye Bye,'” he says. “I’m going to be honest — the highlight of my career.”