Warning: This post contains spoilers from Dear White People‘s final season. Read at your own risk.

“So you want me to talk about Reggie?” Joelle grimly asks in the second episode of Dear White People’s final season.

The 10-episode musical event took our main crew through their senior year at Winchester, as well as the not-so-distant future. Flash-forwards to the future caught us up with most of the crew, including Sam and Lionel, who want to turn their story into a movie and book, respectively. Reggie, however, was noticeably absent from those post-college segments, suggesting that he may have died.

The series finale put that to bed, though, when Reggie showed up still very much alive for the gang’s reunion far into the future. It turns out he went into hiding after killing the armed white supremacist who had targeted Black students. The incident brought him unwanted attention — people harassing him about the shooting or pitching an app — so he kept a low profile for both his safety and to protect his friends. 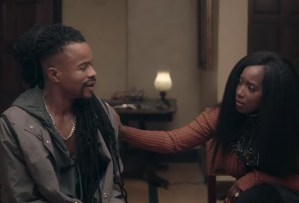 Series creator Justin Simien, who also serves as showrunner, explained why killing Reggie was never going to be an option for the series. “I knew he couldn’t actually die because I didn’t want to see that. I did not want to see a Black guy die,” Simien tells TVLine.

“I just made a horror movie, where I couldn’t even stomach my own ending. I changed it. I didn’t want to see the Black woman at the center of that movie die, either, especially going through the George Floyd of it all. We knew that that was never going to be it, but at the same time, we didn’t want to pull any punches because this is a show that’s supposed to be telling the truth about race in America. So we can’t give it a happy ending… because that’s not how it works out. Turns out trauma lives in you forever, no matter what success you reach.”

Reggie is alive and a successful app developer, but he also missed his college graduation and has been isolated from his friends for years. Still, he made peace with his situation due in part to his relationship with Joelle, which has remained strong through all of it.

“It was really difficult, but we knew we had to thread that needle between telling the truth, and also making something that would be healing for Black people to watch,” Simien explains. “I knew that everyone would assume, as I did as well, that we would have to go the tragic route because how else do you tell the truth? What we found instead was a way for the character to do what we were all struggling to do in that moment, which is to accept the tragedy of our times, to accept the truth of that, but to find joy anyway, and to make space anyway. And that’s kind of how we got there. But it was a tightrope to walk.”

“It’d be crazy for us to sit here and be like, ‘We fixed racism in the 25 weeks we sat in the writers’ room!” co-showrunner Jaclyn Moore adds. “And so with Reggie, it feels very vital that it ends that way because it is complicated. But it’s complicated in a way that feels so true and still cathartic.”