The 10-episode first season centers on Dr. Hari Seldon (played by Jared Harris) and his efforts to preserve the future of civilization after predicting the fall of the Galactic Empire. David S. Goyer, who created the show and serves as showrunner, worked to ensure that the visually stunning series — which spans an entire millennium — didn’t feel like another Star Wars, which itself drew inspiration from Asimov’s books.

“I just kept on saying to everyone that as amazing as those [movies] are, we have to chart our own path and come up with our own visual language,” Goyer tells TVLine. “Spaceships that feel a little different, and jumping through space that feels different — our holograms are called sandograms. I kicked back a lot of designs and said, ‘I’ve seen it, I’ve seen it, I’ve seen it.’”

Goyer also understood that adapting a story that was originally published in 1942 meant making notable changes to better reflect today’s world, like switching the story’s key heroes — Gaal, who is Dr. Seldon’s apprentice, and Salvor, a leader of the colony tasked with compiling important human knowledge — from white men to Black women. “I was conscious of the fact that there were a lot of people that were underrepresented in a lot of these sort of seminal works,” he explains. “I knew that I wanted this show to break through not just the hardcore fans, but to everyone — the people that haven’t read the books, the people that aren’t fans of science fiction. So that was the first decision I made.” 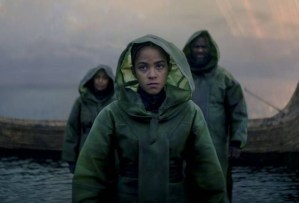 Goyer assembled a diverse writers’ room comprised of a majority number of women and people of color, as well as writers with different sexualities. “I just said, ‘I want us to get into it and debate, and I want the show to reflect the audience of today,” he shares.

Lou Llobell, who plays Gaal, was amazed by the auditions for Foundation’s main characters, which featured a room full of women who looked just like her. “It was great because there were about nine women of color going up for Salvor and Gaal, respectively, and we all were super-supportive of each other even though we were all going up against each other for this role,” she shares. “It was so empowering to see all these women of color in this position where we could lift each other up and support each other and just wanted the best for each other. I’ve never been in a room like that, and I was just so grateful.”

Echoing Llobell’s sentiments, Leah Harvey, who plays Salvor, says they are glad to be involved with a project in which the leading roles are for Black women. “That’s almost unheard of,” they add. “Like, it’s just normal [in this show]… that we are human and we face problems, and our characters are just who they are because of who they are. That’s one of my favorite things about the representation in [Foundation].

Alfred Enoch plays Dr. Seldon’s adoptive son Raych, a character that was also canonically white in the books. The actor, who played Dean Thomas in the Harry Potter films (and of course co-starred in How to Get Away With Murder), notes the importance of audiences being able to see themselves reflected on screen. “That’s something we haven’t always had, and that’s something I think we’re getting better at, so it’s nice to be part of a show that is moving in the right direction,” he says. “We’re talking [about] a story that is on a massive scale, different worlds, different kinds of people. You can’t build that and make everyone look the same. That don’t make no sense to me.”

Some other interesting tidbits from TVLine’s interviews with Foundation’s creator and cast:

Goyer pitched an 80-episode plan for the series to Apple; Season 1 consists of 10 episodes. “Hopefully, we’ll have the episodes to tell this story. I’m certainly putting in place some storylines and questions, many of which will be answered at the end of the season, but some which will continue on,” he says. 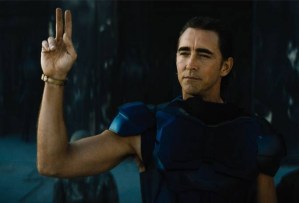 Lee Pace on how the series explores topical issues through a sci-fi lens: “It removes all of the triggers that we live with today. We’re not talking about American politics. We’re not talking about COVID. We’re not talking about the situations that put us in the same kind of circular discussions that we find ourselves in, that personally drive me insane… Science fiction provides us with this territory where we can investigate, ‘What does it mean to be a human? What are our values? How do all of us from our different walks of life look towards this story and have a discussion about those values?’ When we don’t have the crap, the talking points, the way that we’re discussing the issues, in front of us… it’s interesting to abstract them so that we can look at them in a different way.”

Pace on playing Brother Day, the ruler of the Galactic Empire: “I’m not playing a man, I’m playing a series of men who for a certain time in their life take on the role of the emperor of the f—king galaxy, which is such an extraordinary abstract idea. This is a figure who’s got control over trillions of people, thousands of planets, technology that we, here, bound on earth in the 21st Century, can only dream of, and he’s somehow managed to cheat death. He can live forever — he’s cloned himself so he’s maintained this period of prosperity and expansion and growth for 400 years, and he expects to be able to do it for the rest of time.”

Jared Harris on why this show feels all too real: “Sadly, as a species, we’ve made a habit of ignoring good advice. You don’t need to go that far to see the parallels in our own history right now. In that sense, Harry Seldon is prophet who’s written in the mold of Cassandra from the Homeric myths, and that is someone who is ignored or not believed.”