The Wonder Years, which originally premiered on January 31, 1988 on ABC, followed a young Kevin Arnold (played by Fred Savage) growing up in a white middle-class family during the late ’60s and early ’70s. With Daniel Stern narrating as a thirtysomething Kevin reflecting on his younger years, the story focused on his childhood in a nondescript suburban neighborhood against the backdrop of the Vietnam War.

Capturing the charm of the OG series, the 2021 reboot centers on Dean Williams (Elisha “EJ” Williams), who is Black, and his middle-class family living in Montgomery, Alabama during the late ‘60s — when pivotal moments such as 1964’s March on Washington and 1965’s Bloody Sunday are still a fresh memory. The Williams are a nuclear family unit: Bill (Dulé Hill) and Lilian (Saycon Sengbloh) are working parents raising Dean and his older sister Kim (Laura Kariuki) in a quiet neighborhood of doctors, lawyers and teachers. 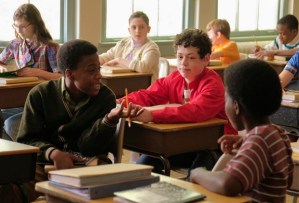 Like Kevin, Dean is just a regular kid navigating the awkwardness of adolescence. However, Dean must also contend with the often prickly social dynamics that come with being a Black kid in a America at the tail end of the Civil Rights Movement.

In Wednesday’s premiere, he passes his old school, which was shut down due to desegregation, during his morning bus ride. At school, he doesn’t notice the two white kids refusing to drink from the same water fountain, and earnestly pleads with Coach Long (Allen Maldonado) to play a baseball game with his friend Brad (Julian Lerner), not realizing the potentially harmful ramifications of playing against an all-white team. (“We go to the same school, we should be able to play each other!”)

The series skillfully balances these moments with humor and nuance. In class, Dean’s teacher Mrs. Hodges scolds him and his friends for using a “yo mama” joke, insisting they be more like their white counterparts. Looking back at the moment, grown-up Dean has trouble deciphering whether or not the teacher was racist — he remembers her being so, but also notes that she paid special attention to Black students she felt had potential.

For the most part, it’s a funny show that paints its young protagonist as a regular kid dealing with mostly normal problems. He’s self-conscious about his glasses, is too shy to tell his crush Keisa (Milan Ray) he likes her and is bullied by a classmate. He even gets to play that baseball game, which backfires because his dad can’t stop shouting contradictory instructions from the sidelines.

But as light-hearted as the series is, it also doesn’t shy away from harsher moments. The tone immediately shifts when the Williams learn that Martin Luther King has been assassinated. We see the pain and grief of each family member gathered around the television, processing the immense loss. While Dean understands the gravity of the situation, that day stands out because his world was shattered for a different reason — it was also the day his best friend Cory (Amari O’Neil) betrayed him by making out with his crush Keisa.

What did you all think about The Wonder Years reboot’s first episode? Grade the premiere below, and sound off in the comments!