They don’t call him “Messy Fessy” for nothing!

On last week’s episode of The Challenge, a heated confrontation between Fessy and Josh turned physical, tearing the Big Brother alliance apart and putting both of their games in jeopardy. (Of course, Tori and Cory were chillin’ ringside, nomming on pizza and fanning the flames.) Thanks to last week’s previews, we know TJ’s coming through, and that is never a good thing.

Will all of this drama seal someone’s fate in Spies, Lies and Allies? Let’s recap!

WHO WAS DEACTIVATED? | At the top, we’re treated to a re-hash of Fessy’s face-pushing maneuver. While he didn’t throw a punch, the contact was deliberate, so it seems a line has been crossed here. But is it enough to send him packing? (Or even both of them?) Josh did throw a drink, we should add, so he’s certainly not innocent.

Josh starts jumping up and down on the couch like a toddler, screaming, “You’re not gonna see a final again!” He then calls Fessy — a guy who is supposedly one of his tightest friends — an “egotistical piece of s–t.” (Again: Dude is standing on the couch, craving all sorts of attention, but OK, Josh. Go off.)

Poor Kaycee is stuck in the middle. As Josh is loudly recounting the night’s events, he tells her she’s gotta choose between the two. (Uhh, is neither an option?) Josh then slams a glass on the ground and goes after Amanda next. (Knowing what we know about Amanda, that’s probably not the smartest move.) Pizzagate ends with Amanda calling out Tori and Cory for their part in the situation, and rightly so. After all, it all started over a case of “Who ate my frozen pizza?” and we wouldn’t have it any other way.

Later that night, Fessy apologizes to Josh, who’s in his bunk crying. The friends speak once again in the morning, exchanging apologies and hashing things out, until TJ crashes the party. “Well, it’s never good when I come to the house,” the host says. Yeah, Teej. We know.

He tells the two guys (and Esther — cuz Josh wasn’t the only one throwing drinks) that their behavior was embarrassing and uncalled for. Esther and Josh get to stay, but the hammer falls on Fessy. He’s out. Deactivated. Done. Cut. “Let this be a warning to everyone,” TJ says.

But that’s not all for this week’s episode. We have an elimination to get to! 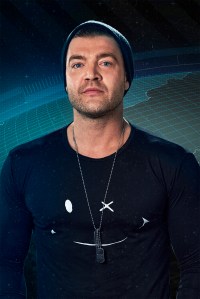 DELIBERATION | Immediately after Fessy’s ejection, the group must gather for an important vote. They speculate that this elimination will be a female-only battle, so they throw Fessy’s partner Esther to the wolves.

From an earlier conversation, we know Emy wants to pick CT as her new partner, and the only way to do that is to go in and take Esther out. (Emy did lie to Berna, though, promising her friend that she wouldn’t steal CT from her. It’s all fair game, though. Lie, lie, lie!)

THE LAIR | The players stroll through the elimination grounds and quickly see… it’s a Hall Brawl! But with a twist. After smashing into each other, the players must climb the cage and ring a bell at the end. First lady to score two points stays in the game. The Agency (Kaycee and Emmanuel) throw Emy in, so the Survivor: Romania castaway’s plan to steal “Uncle CT” is now officially in motion.

These ladies do not disappoint! Esther wraps her legs around Emy “like an anaconda,” but Emy breaks free to score the first point. Round 2 is another brutal showdown. Esther beats Emy to the bell and reaches up to thwack it, but she falls just short, giving her opponent the time she needs to score another point and win the Lair.

On her way out, Esther calls Amber fake and says if she comes back, she’s coming for her. Then, as anticipated, Emy steals Uncle CT, leaving an unhappy Berna to pair up with Hughie.

Did Fessy deserve to go? Did The Goof deserve to stay? Sound off in the Comments!