We expected things to get real weird for the Tranquillum guests during Nine Perfect Strangers‘ finale. (And they did!) What we didn’t expect, after the chaos of the past few episodes, was for everyone to more or less find a happy ending. (But they did!)

Before you give us your thoughts on Episode 8, let’s break down where the characters ended up:

CARMEL | Picking up where last week’s installment left off, Carmel confirms that she was the one who shot Masha in the parking deck that night, and she’s also the one who’s been sending Masha those threatening texts all season long, in an effort to make Masha feel as though she was losing control. (“You succeeded,” Masha tells her.) But now, feeling remorseful for her past actions, Carmel wants Masha to call the police and tell them Carmel is a risk to others. Masha refuses to do so, reminding Carmel that Tranquillum House exists because of what Carmel did to her, and she forgives Carmel, even if Carmel can’t forgive herself right now. “You give me nine to 14 hours,” Masha tells Carmel, “and we are finally going to heal.”

Later, once Masha has gone off to rejoin the Marconis on their hallucinogenic adventure, Carmel finds herself in Tranquillum’s water-filled sensory deprivation tank, which she doesn’t remember climbing into of her own accord. She’s panicked by the small space at first, then relaxes and smiles when she begins to envision herself dancing with her kids. Carmel seems much calmer when she climbs out of the tank a few minutes later… then erupts into rage and panic all over again when Tranquillum employee Glory won’t let her out of the steam room, claiming that Carmel must stay in there for her own safety and the safety of others. 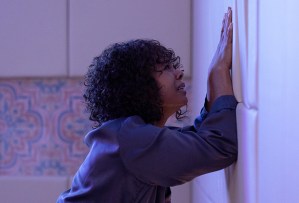 Eventually, Frances, Tony and the other guests overhear Carmel screaming for help from the steam room, and they track down Masha to let her out. Masha does bring the others back to the steam room and lets them visit with Carmel for a moment, ensuring Carmel that she just needs to rest for a while. But when Masha leaves the room again, the entire group realizes they’re now all locked inside — and it’s starting to smell like something’s burning. And it’s getting very hot in there.

Later, as the group begins to sweat and hyperventilate a bit, they all become acutely aware of their own possibly imminent deaths, assuming there’s really a fire growing outside the steam room doors. They become introspective and honest with each other, exchanging Breakfast Club-esque confessions: Lars really does love Ray and wants to raise a child with him. Ben wants to go back to work. Jessica wants to stop caring what others think and run her own business. Frances — who has since apologized to Tony for shutting down the blossoming romance between them in Episode 7 — admits she’s grateful for meeting Tony, who she thinks could very well be a recipient of her house key sometime soon. (Not a euphemism, to my knowledge.)

After everyone spills their secrets, the lights go out in the steam room, and Yao opens the door to reveal there was never actually a fire threatening them: It was all a simulation, Dwight Schrute-style, to make them believe they were on borrowed time and become more contemplative. “Masha would never put you in any harm,” Yao tells them. Whatever you say, sir!

MASHA & THE MARCONIS | Speaking of Masha, she and the Marconis go on quite the drug-fueled journey in the finale. Despite the Marconis’ initial anger at Masha when they feel she’s merely been exploiting them to reconnect with her late daughter, Masha convinces them that’s not true, urging them to trust her because she understands the grief they feel.

All three Marconis ultimately do see Zach during their trip, and their conversations with him turn out to be quite healing. Even when Napoleon is haunted by the sound of the iPhone alarm that he ignored the morning of Zach’s suicide, Zach implores him to interpret that alarm as “time’s up on mourning my suicide.” Zach continues to his family that he is “so sorry for hurting you the way I did, but you’ve gotta separate me from that day.” Through their tears, the Marconis tell Zach they understand what he’s saying, and they exchange hugs and “I love you”s as Zach walks away one last time. 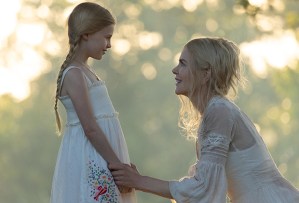 Meanwhile, Masha — who divulged to Zoe earlier that she’s never been able to conjure her late daughter, despite several attempts — finally does visualize the girl as Masha’s trip reaches its peak. As Zoe looks on, Masha cradles her daughter and sings a lullaby with her… until they’re interrupted by the cops, who have arrived at Tranquillum after Delilah booked it to the police station. Masha’s daughter stands, says something to her in Russian and kisses Masha’s forehead before walking off, leaving Masha, more serene than ever before, to happily cooperate with the cops descending upon the grounds.

Although this group of Tranquillum guests was particularly wary of Masha when they arrived days ago, they all seem to have been convinced of her healing abilities, and they each protect her while talking to the police: Lars isn’t willing to give up all the footage he filmed, Napoleon recites a Shakespeare quote instead of giving a proper statement, and even though Jessica does reveal that some people ingested drugs without their consent, even she admits she’s not as mad as she should be about the events of the past week.

After they’ve spoken to the cops, Frances and Tony grab dinner at a Four Seasons down the road, and a newly inspired Frances borrows the waitress’ notepad to jot down some ideas for a novel. As she’s writing, we’re treated to a montage — come on, who doesn’t love a good finale montage? — showing each character’s future. Yao and Delilah work with the Peace Corps. Lars and Ray did reconcile and now have a baby together. On a table in their living room sits a New Yorker magazine with an illustration of Masha on the front; Lars wrote the cover story, titled, “Psychedelics to the Rescue.” Carmel now leads a support group of her own. The Marconis are in the car together, and Napoleon covers Heather’s hand with his. Frances and Tony live together, they finally got that dog, and Tony has reconnected with his daughters. My favorite future is Ben and Jessica’s, though: They run Tranquillum now! And they absolutely rock that all-white wardrobe.

After the montage ends, we’re back at the Four Seasons table where Frances is still writing. She looks up and smiles at Tony, who is nodding off across the table from her. And in one last flash-forward, Masha is driving a yellow Lamborghini down a winding road, and she sees her daughter beaming at her from the passenger seat. There’s also a novel sitting on Masha’s dashboard: Nine Perfect Strangers, by Frances Welty.

OK, your turn. What did you think of Nine Perfect Strangers‘ finale, and the show overall? Cast your votes in our polls below, then hit the comments to elaborate!