Warning: This post contains spoilers from Chicago P.D.’s Season 9 premiere. Read at your own risk!

If you need to take a moment to process everything that went down in Chicago P.D.’s Season 9 premiere, we don’t blame you!

Picking up where we left off in the finale, Wednesday’s episode, titled “Closure,” saw Burgess’ life hanging in the balance while Intelligence searched for her kidnapper, and Upton and Voight covering their tracks after killing said suspect.

The good news is that Burgess pulled through in the end. However, Upton will need to find a way to “make peace with the fact that you’re never gonna be able to make peace” after what went down with Roy, as Voight succinctly put it.

Oh yeah, those who were rooting for Upton and Halstead to take things to the next level finally got their wish — the Intelligence detectives are officially engaged! The big moment came at the end of the hour, with Halstead both accepting Upton’s proposal and then formally asking her on bended knee because he’s old-fashioned. 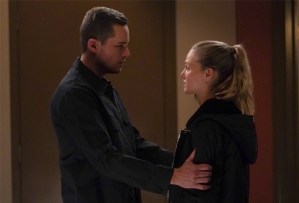 “Even though the motivation on Hailey’s side is murky because she’s obviously going through such an emotional moment with what she did and the guilt, there’s a real love between the two characters,” Jesse Lee Soffer tells TVLine. “For Jay to take the reins and go, ‘Okay, yeah, this is how I feel. Let’s do this,’ [it’s] important to see that he’s not just along for the ride, that this is something that he wants. I think it’s gonna be fun for the fans.”

This season, Upton will struggle with keeping up the lie about what really happened to Roy. There’s an uncomfortable moment in “Closure” where Burgess asks Upton if they found the guy who ambushed her, and Upton stiffly tells her he got away. “It’s eating away at her,” Tracy Spiridakos shares, “and Halstead starts to notice that something’s off with her and continues to ask.”

An upcoming episode will explore the idea of Halstead potentially finding out the truth, which might not be best thing for the newly engaged couple. “They very much deeply care for each other, and this whole thing is definitely going to affect their dynamic,” she adds. “But I do think that they’re in it for the long haul. I don’t know of a wedding anytime soon, but I can see that happening at some point.”

We may not know when or if an “Upstead” wedding is happening, but Soffer has confirmed that the third episode of the season will delve into Halstead’s military background and feature a character from his past. “There’s a clearer picture as to why Jay doesn’t want to talk about his time in the Army,” he teases.

What did you think of Chicago P.D.’s Season 9 premiere? Grade the episode below, and let us know your thoughts in the comments.