Warning: The following contains spoilers for Wednesday’s Chicago Med premiere. Proceed at your own risk!

One of Chicago Med‘s departed characters made a surprise return in the medical drama’s Season 7 premiere. 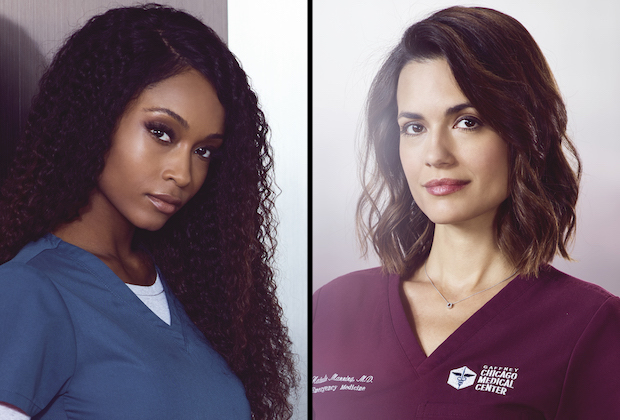 As previously reported, Torrey DeVitto (Dr. Natalie Manning) and Yaya DaCosta (nurse April Sexton) both exited the series after the conclusion of Season 6. DeVitto, however, briefly appeared at the start of Wednesday’s season opener to wrap up her character’s arc. With her ex Will’s help, Natalie packed up her car and prepared to move elsewhere with her son. “I’m gonna be OK,” she reassured Will, before urging him to get back his job at Med. The two then hugged and vowed to keep in touch.

As for April, it was mentioned that she was in a nurse practitioner program, but neither she nor her ex Ethan, who’s currently in physical therapy, were seen in the premiere. (His portrayer, Brian Tee, remains a series regular on Med.)

Elsewhere, Goodwin did allow Will to come back to the hospital — with the caveat that he cozy up to a doctor (played by Michael Rady) who might be committing fraud and that he get an admission of wrongdoing.

Below, showrunners Andrew Schneider and Diane Frolov talk about what’s next for Natalie, giving closure to “Manstead,” why April didn’t return and more.

TVLINE | Going into this season premiere, what were your goals in terms of wrapping up the loose threads and exits from last season, while also moving forward?
ANDREW SCHNEIDER | We had a number of things we needed to accomplish. One is we wanted to bring Will back, so we had to find a way that was logical and emotional.
DIANE FROLOV | And take the story forward. And also, we wanted to see new sides to our characters or new relationships, knowing that would be Will and Goodwin, to change that up.
SCHNEIDER | We also wanted to give closure to his long-running relationship with Natalie. That relationship was so integral to the show for six years, and we felt we owed it to the audience and the characters to give them a goodbye.
FROLOV | And also, too, with Crockett and Will, that there would be some healing there for those two guys as well.
SCHNEIDER | And then we wanted to establish Archer as continuing as the interim chief of the ED and his often prickly relationship with Dr. Charles. And introduce our new characters. There was a lot!

TVLINE | Natalie was kind of vague about where she’s going and what’s next for her. Is there anything you can share about where she’s at, professionally and personally, after this goodbye?
FROLOV | She’s, right now, going back to Seattle, where she’s from, and being with her family. Her mom is from there, and she’s going to be getting a gig at a hospital there.
SCHNEIDER | A good, really prominent hospital. Her career is not damaged. Goodwin did not make a big deal; she just let her go. So she goes on. She is going to be fine.

TVLINE | Is that mentioned in one of the upcoming episodes, or is that just off-screen?
SCHNEIDER | It hasn’t been yet, but we should reestablish that. We had it in earlier drafts of this premiere [episode], but then it kind of fell by the wayside.
FROLIOV | It was a lot to just get out. 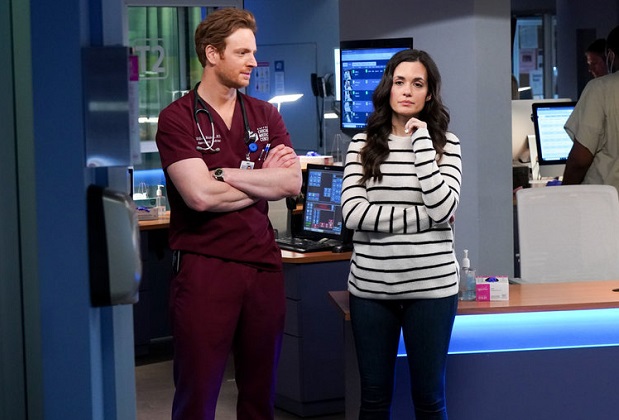 TVLINE | If the circumstances had been different, and Torrey had stayed on the show, do you imagine that Natalie and Will would have ended up together? Or were they always meant to go their separate ways and just be better off as friends?
FROLOV | I think there was a real possibility [for] them. I mean, they do love one another. So yeah, that was always a possibility that they would end up together.
SCHNEIDER | And hey, who knows?! She’s alive! She’s well! Who knows? We’re only in Season 7!

TVLINE | What was it like to have Torrey back for this one last scene?
SCHNEIDER | It was great! She’s such a trouper, and she wanted to do it. She was just great.
FROLOV | And everyone was very touched. There were tears all around. It was an emotional [moment].
SCHNEIDER | The crew loved Torrey, and so for them, it was great to have her back. For all the production people and for us, the writers, it just melted our hearts to see her back.

TVLINE | Unfortunately, we didn’t see April. Were there discussions about bringing back Yaya to wrap up April’s story arc?
FROLOV | No, we didn’t really discuss that because we don’t see that April is gone in the same way, in the sense that we know April’s OK.
SCHNEIDER | She didn’t leave under a cloud. She’s off studying to be a nurse practitioner, and she could come back, too. 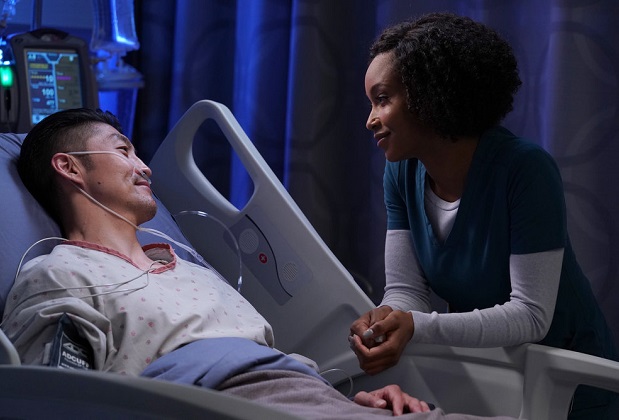 TVLINE | Last we saw April, she was telling Ethan that she loves him. That’s a pretty open-ended scene for the two of them. So how might that be resolved moving forward?
SCHNEIDER | You’re gonna have to wait and see!
FROLOV | They do love one another…
SCHNEIDER | [But] he realizes how important it was to follow her professional dream, to do this. And he’s got so much to recover from, physically and emotionally, from the shooting, which will be part of this season going forward.

TVLINE | So that “I love you” is something that is touched upon in a future episode?
SCHNEIDER | There will be mention of that relationship.
FROLOV | But nothing soon, though. Because he’s not coming back until several episodes down the line.

TVLINE | Will is acting as Goodwin’s spy. It’s another situation where he has to be sneaky. How will this time be different?
FROLOV | That’s why she picked him. [Laughs]
SCHNEIDER | But his willingness to help her and his dedication to uncovering potential fraud will make her see him in a new light and respect him in a new way. So it will actually bring them closer together. They had a very contentious relationship, and that will change.

Med fans, what did you think of the season opener? Grade it below, then hit the comments!