As The Voice’s Season 21 Blind Auditions continued Tuesday, with new coach on the block Ariana Grande learning just how discomfiting it can be to get caught up in Blake Shelton’s shenanigans with John Legend and Kelly Clarkson, we were introduced to a pop-rocker who rasped “like a frying egg,” a Season 19 wannabe making a triumphant comeback and an R&B singer with (per John) the “audacity” to cover Ari in front of Ari. But did any of them sound like they had what it takes to follow Cam Anthony into the winner’s circle? Read on, and we’ll evaluate.

Lana Scott (Team Blake), “Hole in the Bottle” — Grade: B+ | This 28-year-old Virginia native, whose late grandmother predicted that she’d someday end up on The Voice, was so twangtastically country, Blake turned his chair almost immediately. But the two-chair turn wasn’t just country, she was really good country — almost Dolly-esque on her Kelsea Ballerini cover. It didn’t sound like a compliment when her eventual coach said that Lana had “that whiny country thing” going on, but it was!

Samuel Harness (Team Legend), “Here Without You” — Grade: A- | One of five adopted sibs, this 26-year-old charmer made opportunity knock by slowing up Three Doors Down and singing with an ache and an intensity that called to mind Season 20’s Corey Ward but a hot-as-hell rasp that was all his own. Blake even said that it was less of a rasp than “a sizzle, like a frying egg.” For her part, Ari marveled that the three-chair turn managed to scratch out high notes in a way that sounded “grungy but not unhealthy.” 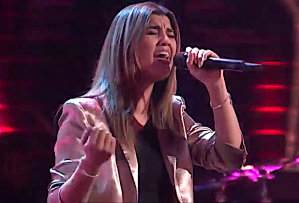 Carolina Alonso (Team Kelly), “El Triste” — Grade: A | A biochemistry major whose parents moved their family to Reno from Mexico to escape the violence in their native country, Carolina delivered a performance that was so massive, it could’ve knocked over the studio’s walls. I couldn’t believe it took Kelly even a nanosecond to turn for her, because this was not only a Spanish song, which the coach adores, it was sung with a passion and power that left me lightheaded. And that key change? Bonus!

Chavon Rogers (Team Ariana), “drivers license” — Grade: C | Gotta give this mop-topped 23-year-old from Blake’s hometown credit for creatively swerving Olivia Rodrigo’s smash down an alterna-rock lane. If only the two-chair turn had been able to pull together the pieces-parts of his mumbly arrangment into a cohesive whole. Was anyone else surprised that Ari — aka the most technical coach — swiveled her chair as Chavon was strangling a high note? 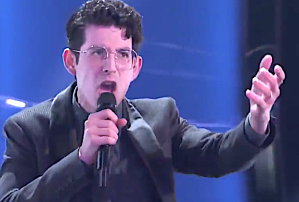 Joshua Vacanti (Team Legend), “Into the Unknown” — Grade: A | So spirited and mammoth was this 28-year-old’s Frozen 2 cover that it was like a Nor’easter: It. Would. Not. Be. Denied. John was even so impressed that he used his one and only Block on Ari, who was all about Joshua’s “kooky” song selection. He has a huge voice, that’s for sure. The question is, how adaptable is it to numbers that aren’t quite so musical-theater-y?

Hailey Green (Team Blake), “Home” — Grade: A+ | Back after a failed Season 19 audition, this 15-year-old hit the stage spitting gravel. A total badass, she demonstrated that she’d come light years since her first tryout, making this less a “Please like me” moment than a “This is me, take me or leave me” one. The one-chair turn gave a performance that was wild and untamed, raw and authentic. I probably would’ve given her an A for the growl alone, so completely sold was I. 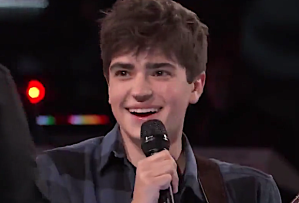 Jim and Sasha Allen (Team Ariana), “Leaving On a Jet Plane” — Grade: B | After an intro package in which Sasha shared that he was transgender, he and his dad delivered a perfectly lovely rendition of the John Denver classic. It didn’t give me chills like Girl Named Tom Monday night, but it was beautiful — as Ari noted, harmonious and as pitch-perfect as ya can get. Too bad neither of the chairs they turned belonged to Blake, for whom they’d been hoping so much, Sasha had sketched the three of them together.

Paris Winningham (Team Legend), “Superstition” — Grade: B+ | This 32-year-old Floridian who traveled the world in the Navy started off his Stevie Wonder cover fine but not exceptional, serving up a voice as rich and thick as a Ho Ho. But it turned out that he was just holding back. When he let his performance go off the rails and get looser, more rollicking, he… Well, John said it best: The two-chair turn “just lit this stage on fire!” Maybe he was, as Kelly noted, a smidgen pitchy, but he was still a blast. 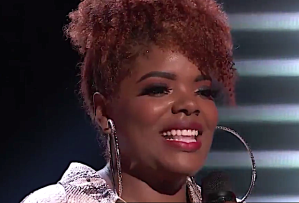 Gymani (Team Kelly), “pov” — Grade: A | After this 23-year-old Georgian turned out a lovely, lilting rendition of Ariana’s hit, the new coach on the block told the four-chair turn, “That’s your song now!” Ari as well as John and Kelly loved the mother of two’s tweaks to the melody. That slight rearrangement, Kelly thought, was “strategically incredibly brilliant.” But what really sold it for me — again — was when the singer let loose and belted. It was like she was punching me in the ears, and I loved it so much, I was like, “Yes, ma’am, may I have another?”

So, who stood out to you Tuesday night? Vote for the most impressive auditioner in the poll below, then hit the comments with your reviews.