This week’s Supergirl leaned into uncomfortable conversations as Kelly Olsen tried to get the rest of the Superfriends to focus their attention on an underserved community in dire need of help — but found herself shouting into the void.

Tuesday’s episode, titled “Blind Spots,” centered around the Ormfell building collapse that made nearby residents, including young Joey (Aiden Stoxx), severely ill. The Arrowverse show’s titular hero meant well in her quest to find Nxyly — the Fifth Dimensional imp was a major threat to National City — but her focused efforts ignored the immediate crisis directly caused by this conflict: a hospital lacking the resources to treat people who were getting sicker and sicker by the hour.

Kelly grew increasingly frustrated over the lack of aid from the Superfriends, except for her girlfriend Alex, who called a friend to send over additional supplies, and Dreamer, who lent her a device to help with her investigation. Diggle (guest star and director David Ramsey), who was referred by her brother James, also provided some much-needed support as she investigated the cause of the community’s illness. However, it wasn’t until Kelly spelled out what was happening and that “getting back to normal” wasn’t good enough — they need restorative justice — that Supergirl finally realized she’d overlooked an entire community. 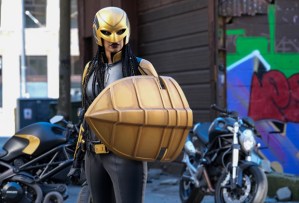 “That day was really hard,” Azie Tesfai tells TVLine of Kelly’s frank conversation with Supergirl. “It is an interesting thing when you have a character that represents the best of so many people, and so to take that and challenge it was uncomfortable for some people.”

Melissa Benoist, meanwhile, “really wanted to lean into the uncomfortableness of it,” she says. “There was a lot of crying. It was uncomfortable.”

Tesfai co-wrote the episode alongside J. Holtham (Pitch, Cloak & Dagger, Jessica Jones) and recalls the raw emotion felt by everyone during that scene, including the cameraman who told her he wanted to cry. “I’m like, ‘This is how we should feel because these conversations feel that way,'” she explains. “Many times, it comes at the expense of the person that’s sharing it because we compromise ourselves to make you feel better. Having Kelly say things that either I’ve said in my life or I’ve always wanted to say and didn’t feel empowered to was a tricky situation. I felt myself want to comfort in certain moments and being like, ‘No.’ This character is also teaching me how to stand in my boundaries and unapologetically speak on how I feel.”

The show highlights those boundaries in Kelly’s conversation with Alex at the end of the hour. When Alex asks how she can better support her girlfriend, Kelly, who’s still processing the events of the episode, asks for the time and space to unpack everything and to just be loved and supported. It’s a tough but necessary moment that speaks to the episode’s thesis, which is that these issues take work and can’t be solved in a day.

Tesfai notes that she and costar Chyler Leigh have had similar conversations off-screen, speaking to their strong bond as real-life friends.

“Chyler and I are very close in real life, so even our dynamic and tackling subjects of race have that [discomfort] to it because she’s so loving and so supportive of me,” she shares. “But it’s like, I can tell you something, but you’re never really going to get it. Like, how can you support me in ways that that make me feel better, and not just make you feel better? It is such a complicated thing to tackle, and I was grateful that that scene didn’t change much at all from the first draft. Everything changed a lot as we were going through notes, but no one touched that scene.” 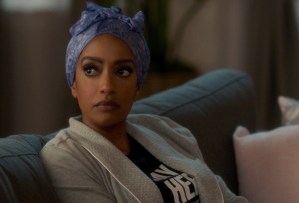 Tesfai also shares a real-life friendship with Ramsey and leaned on that strong bond while creating the episode. “It really felt like we went through war together… We were a team, and it was incredible to have that support on set and off set,” she says. “It felt like a student film because it was so intimate and there weren’t a lot of cooks in the kitchen. They really gave us so much say in how we did it that it felt really small, even though it was this big show.”

The episode saw Kelly step up as Guardian to help an underserved community, and those efforts will continue throughout the rest of the season. “The good thing about this is it is a continued conversation that really goes through the finale. Once Kelly finds her power, she stays in it,” Tesfai explains. “We actually go more into her as a social worker, and that storyline becomes a big part of her after the next episode.”

Fans can also expect plenty of fun scenes between Kelly and Alex, who are enjoying their statuses as crimefighting girlfriends. “[She] and Alex have some hot scenes where they make out and then kick some butt,” Tesfai teases. “It’s the best of a crimefighting duo that are in love… We have fight scenes where we talk about, ‘What did you make for dinner?’ which is very fun.”