This week on DC’s Stargirl, Yolanda’s lingering anguish over Henry’s death and her murder of his father Brainwave manifested itself in a way like never before. When push came to shove, how did the young hero arrive at a certain peace with her actions?

In short: After unsuccessfully running by her clergyman the idea that some sorts of killing are good, drawing daggers from her own mom, and later being tormented by vivid visions of both Henry and his dad, Yolanda ‘fessed up to Rick and Beth her hands-on role in Brainwave’s death. When neither of her allies could give offer full-throated support for her actions — and knowing that if/when the time comes to kill Eclipso, Wildcat would probably have to be the one to do it! — Yolanda announced to the team that she is hanging up her cowl and claws, and quitting.

Reflecting on Yolanda’s decision (and the first part of her breakup with the JSA), portrayer Yvette Monreal says, “it was the hardest thing in the world for her,” given that after long being the target of shame at school, “Wildcat gave her this newfound confidence. It was a like a rebirth for her! To have to let that go was really hard for her, and it was heartbreaking for me to watch, too.”

In fact, Monreal shares that she and series lead Brec Bassinger “and I had a little moment backstage, where we kind of teared up a bit, because we didn’t know what was going to happen after that. We were getting episodes as they came, so we didn’t know.” 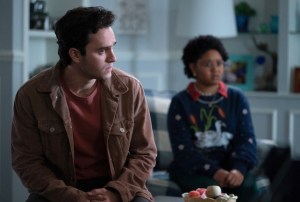 If either Beth or Rick had retroactively backed up Yolanda’s play, “she would have felt some kind of validation” and possibly not have quit, says Monreal. “But she had a feeling that she wasn’t going to get it, and she was right! That’s why I give that look to Courtney, like Yeppp. It pisses me off because I kind of saw it coming.”

On the brighter side of things…. This week’s episode marked the on-screen returns of both Jake Austin Walker and Christopher James Baker, as Henry Jr. and Sr. “Oh my gosh, we celebrated when Jake came — that was the funnest thing,” Monreal effuses. “And Chris, he’s frickin’ brilliant, I loved working with him again.  It was so fun having them both back for real. I have some videos from behind the scenes that I can’t wait to post!”

Now, back to Yolanda and her resignation from the role of Wildcat. What will it eventually take, if anything can, to make her reconsider — and hopefully reverse — her decision?

“It’s tough,” Monreal says after much consideration, “because she was struggling with her guilt for such a long time that, now that she’s left the JSA, she feels like she can start over — whatever that means for her.

“I think the JSA is going to have to be in some really deep crap for her to come back! It has to be bad,” Monreal adds with a laugh. She then casually notes that “in the comic book, Eclipso has it out for Yolanda and Beth, so… you never know!”