Did you bring your scorecard, honey? Because Our Kind of People throws so much shade and clapback that you probably lost count of who had the upper hand.

Angela (Yaya DeCosta) and them weren’t playing the dozens when Karin Gist and Lee Daniels’ rich-and-wicked drama premiered Tuesday on Fox, but they might as well have been. There were so many people putting other people in their place, it felt like a Real Housewives dramatization.

And that’s the fun of it. Because while it’s fascinating to find out about Black one-percenters who call Martha’s Vineyard home, it’s even more fun to see fictionalized versions of them bicker over the pettiest of things.

For starters, Angela is the daughter of a maid and a rich and powerful mystery man. And she set up shop in the island’s Oak Bluffs area (where the rich, Black and fabulous reside and vacation) to figure out who her father is. Angela, whose mom recently passed away, is also trying to establish a hair-care business based on her mother’s signature conditioner. Daughter Nikki (Alana Bright) and the unfortunately nicknamed Aunt Piggy (Debbi Morgan) have joined Angela on her journey to try to keep her focused and less enamored by the glitz and glamour.

Leah (Nadine Ellis), meanwhile, is the gatekeeper for a ladies’ social club called the Gracities that Angela wants and needs to be a part of to secure her professional success — but the two share more than ambition. Teddy, Leah’s wealthy and charismatic father played by Joe Morton, is (not surprisingly) also Angela’s father. Gasp! It’s a revelation that came at the end of the installment titled “Reparations” via flashbacks and such. 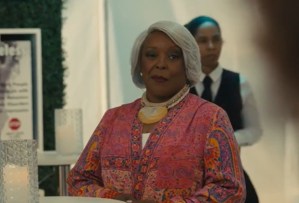 Perhaps shared blood is the reason Leah felt so badly deep inside when she ripped Angela at the Gracities afterparty and announced to a crowded room that Angela’s mom wasn’t just a maid, she was a criminal who had been arrested for selling drugs. (Burn!) Although Leah felt shame, her mother-in-law Olivia (L. Scott Caldwell) enjoyed every cringeworthy moment.

Later, when Angela asked Leah to return the wig she let her rock during the fashion show, Angela dissed Leah’s dry ends and called her a slave to wealth. (Clapback slap!) Leah’s daughter Lauren (Rhyon Nicole Brown) was mean to Nikki, and Nikki almost outted Lauren. Nikki also came for Angela about being hypocritical and thirsty, but women and teenage girls weren’t the only ones snatching edges and receipts.

Morton earned every dime and dollar of his paycheck — as per usual — when he delivered a soliloquy that would’ve made Papa Pope proud. Just like that Pope guy, Teddy was cussing out his daughter for trying to call him on his less-than-ethical business practices. 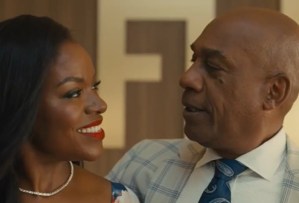 There was a lot to the speech, because you know, Joe Morton, but the highlights went something like: “A Black man in America holding the American dream in my Black hands … So don’t you tell me that you don’t like the dirt under my fingernails. You can keep your seat at the foot of this table. Just never forget who sits at the head of it, little girl.”

As you can imagine, that was the sickest burn of them all. Even if you didn’t love Our Kind of People, you should probably tune in weekly to see who Teddy will curse out next because you know it’s coming and it will be awesome.

What did you think of the Season 1 premiere of Our Kind of People? Grade it in our poll, and drop your thoughts in the comments.