New Amsterdam pulled the ultimate bait and switch in its Season 4 premiere, with one doc making a big decision to bid adieu to the hospital (but not the one you were probably expecting).

While it definitely makes sense that Helen would move back to the UK to take over as medical director of her former workplace, by the end of the hour, it was another doc who was declaring their intention to leave New York City altogether.

Let’s rewind back to the night of Max and Helen’s kiss, during which they definitely do a lot more than just smooching to the tune of “Feelin’ Alright.” In keeping with the episode’s title, “More Joy,” the montage has a very joyous vibe. “Is this even real? I have thought of nothing but you and this for so long,” Max confesses, while kissing his way up Helen. “Now it feels like I have a future again. With you.”

But Helen doesn’t respond to the romantic declaration the way Max might have expected. “I should never have let you in,” she says. Her trip to London made her realize how much of herself she packed away in the name of self-preservation, she explains, adding, “I need to go home — for good.”

Max wants to make a go of a long-distance relationship, but Helen is skeptical that they can make it work when they haven’t even had a short-distance relationship. Max declares that he will embarrass himself in front of all of New York City unless she agrees to try. He goes on the patio and yells, “New York, I love this woman…” Then he threatens to run through the streets buck-naked and starts unbuttoning his pants. Helen laughs and blurts out, “OK, I love you.” Woo-hoo, right? Not so fast. Already Max and Helen can’t coordinate their busy schedules to find one weekend to spend together.

Jump to three weeks later, and Helen is in London, while Max is interviewing Dr. Wilder (Zoey’s Extraordinary Playlist guest star Sandra Mae Frank) to take over her position. She’s extremely qualified, quick-witted and has good taste (she calls Dr. Sharpe “super foxy”), and I already sorta love her. After helping out with a crisis at the hospital (more on that in a sec), Dr. Wilder says she’d love to work there, but something tells her Dr. Sharpe is not replaceable. “Don’t let her go,” she advises Max. 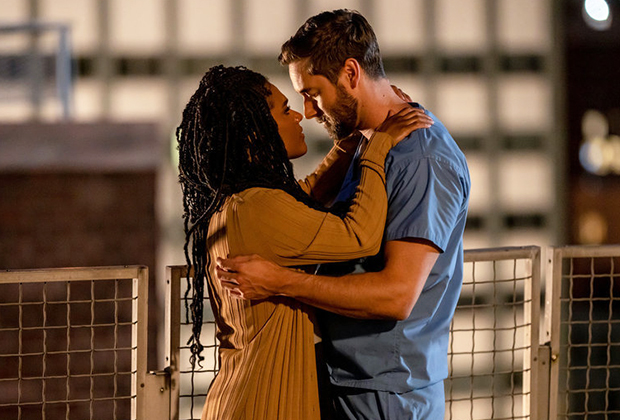 Later that evening, Helen, fresh off her flight, greets Max on the roof. After a difficult 18 months, he’s all about finding joy in his life, and that’s what Helen is to him, he says. She asks if he’s found her replacement yet. “No one can replace you,” he replies, then stuns her (and me) when he adds, “But I think I found someone to replace me.”

“I’m going with you. More joy,” Max finishes as Helen breaks into a grin and they kiss.

Elsewhere, Iggy starts his first day as the psych residency director and is quickly forced to confront his issues when fires start breaking out at the hospital. Max wants a psychological profile of the arsonist, which means Iggy has to visit pyromaniac Mary (a terrifically chilling Isabel Keating) in the Corrections Department for a consult. Mary pushes all of Iggy’s buttons about not seeing patients anymore, while also convincing him to let her visit the burn site. She gathers that the arsonist is in pain, leading Max to realize that all the fire sites used to be COVID overflow units. He confronts the arsonist — a building painter who lost his wife to coronavirus — before the man burns down what is now back to being the daycare where Luna is playing. 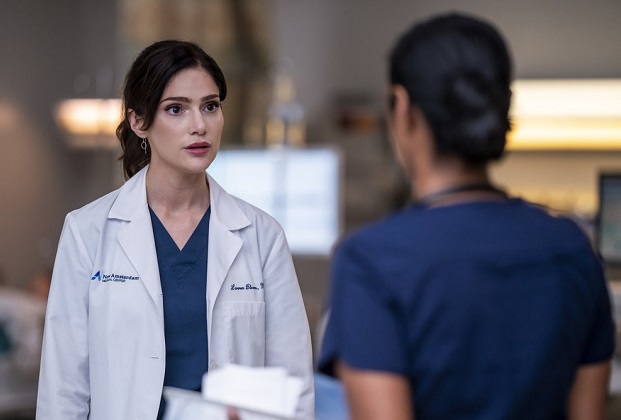 As for the show’s other relationships, Lauren gives her new residents a no-nonsense welcome speech, then bluntly announces in front of everyone that Leyla is her main squeeze. After Lauren compliments her on a procedure while reading everyone else the riot act, Leyla confronts her girlfriend. Lauren apologizes for not waiting to reveal their relationship and explains that she was working her program, which means not keeping secrets. (Um, you’re keeping a pretty big one from Leyla, Dr. Bloom!) To even things out, she later yells at Leyla in the middle of the ER, earning her a small smile from Leyla.

Meanwhile, Floyd’s sad surgery playlist (“Ain’t No Sunshine”) leads Baptiste to ask, “It’s a woman, isn’t it?” After Floyd says he ended things, his new boss encourages him to find a way to make it work. “It’s not that simple,” Floyd replies. I’ll say! 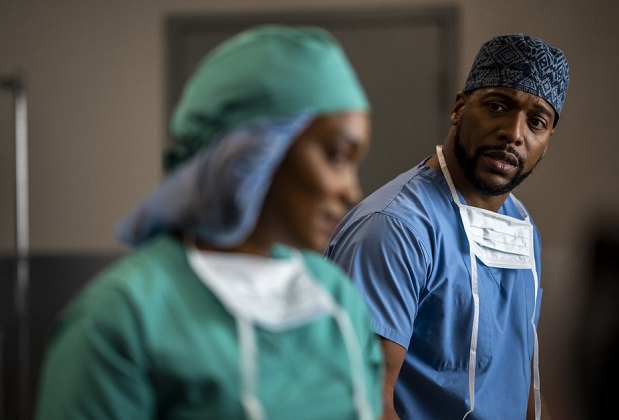 After Floyd and Lyn are almost taken out by one of the fiery explosions, the two finally talk about where things stand. Lyn says it hasn’t been easy for her either, especially since her husband seems to like Floyd even more than she does. “Something’s gotta give. Either I step down or…” Floyd trails off. The next time he enters the OR, his playlist is decidedly more chipper. They worked things out, but they’re still figuring out some details, he tells Baptiste.

New Amsterdam fans, what did you think of the season opener and Max’s big declaration? Hit the comments with your thoughts!