If Dear White People is going to do one thing, it’s the unexpected.

In its final season, premiering this Wednesday on Netflix, the satirical dark comedy flips the script with a vibrant ‘90s musical event as its multi-talented ensemble tackles their senior year through song and dance.

Justin Simien, who created the series and serves as showrunner alongside Jaclyn Moore, had been waiting years to do a musical number. With the show ending after four seasons, he found the perfect opportunity to finally fulfill that longstanding goal and on a much larger scale.

“I just really wanted to,” Simien tells TVLine. “We found out that the show was coming back and that it was ending all in the same moment, and so I wanted [to do] something that was going to feel worthy of an ending that we also couldn’t have had the benefit of building to because we never knew we were coming back every time the show came out,” he explains. 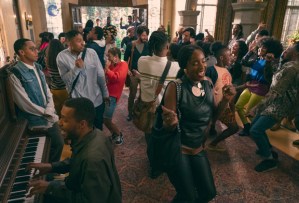 “It was one of two things that we had never quite gotten to do but wanted to do since Season 1. When we got to the final season, it was like, ‘Well, you know, make an event of the end of Dear White People. Let’s just do it for the whole season altogether.'”

For Brandon P. Bell, who plays Troy, ending the series after four seasons felt like the right time to go. “I think Justin let most of us know early on he wanted four seasons. College traditionally is four years, so it felt right,” he explains. “I got some closure in the best of ways.”

“I think I was ready to say goodbye, honestly. I’m tired of playing a n—a with glasses on,” DeRon Horton, who plays Lionel, adds with a laugh. “I love this character so much… I think it has been a challenge in so many ways.” Horton might be ready to part ways with Lionel and his signature frames, but the actor also says he’ll miss his castmates and “a lot of the lessons that I learned, just the way they supported me, and the relationships we built.”

Antoinette Robertson found it difficult to say goodbye to Coco after four seasons but is proud of the work she and the rest of the cast did throughout the show’s run. “I’m gonna miss us and our vibe and how much fun we had on set together,” she says.

“That final moment [of the series], that was a moment,” Robertson says of the series finale. “We were all there in that space in time, and the second the light went dark, I took an exhale, and it was like, ‘Oh my god, this is over. This is it.’ That wasn’t our final scene [to shoot], but we all felt the finality in that moment.”