London Brown knows that Power Book III: Raising Kanan fans feel passionately about the Starz drama and his performance as Marvin. He’s also hoping they’ll ease up on haranguing him on Twitter and on the street.

Yes, Marvin has crashed not one but two Mercedes-Benzes while his enemies opened fire. But the Ballers vet argues his character’s vehicular collisions are all a part of his gangster process.

“People want to talk about him wrecking cars,” Brown passionately tells TVLine. “But Marvin does what he has to do by any means necessary. Sometimes that means wrecking Benzes and driving head-first while people are shooting firearms. If it means he can save his nephew from being shot and killed or his brother from burning up in a house fire, he’s going to go for it. Marvin is ride or die to a fault.”

Although fans view Marvin as the show’s comedic foil, Brown says the laughter is an afterthought. 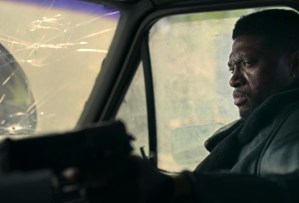 It’s the complicated aspects of Marvin that make him so enjoyable to play, the actor adds.

“People talking about his car insurance is going to be sky high,” Brown groans. “Marvin probably doesn’t even have real paperwork on those cars. Do you think as fly as he is, he’s going to the DMV? He pays the Dominican car dealers in cash and handles his business. He’s not walking anywhere or catching the bus or the subway. That’s what they’ve got to understand.”

Comprehending Marvin’s driving missteps is one thing. But his shortcomings as a father and his choice to use violence even shocked his portrayer during this week’s installment, titled “Loyal to the End.” That’s because Marvin not only failed to embrace his daughter Jukebox’s sexuality, but he physically attacked her.

“That was the hardest thing to shoot, and I know [costar] Hailey [Kilgore] would say the same,” Brown recalls. “It was very difficult. We had tons of questions. I didn’t know how to approach it. Hailey and I even talked about it after the fact. I just needed it to make sense. Why would Marvin get physical with a daughter he’s barely around? I talked to my LGBTQ friends, and they said violent reactions from strict parents are common. We also had to meet with the stunt coordinators to work out the physicality of it.” 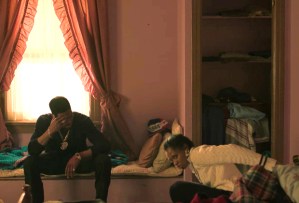 Brown also took into consideration the time in which the story takes place, he says.

“You also have to remember this was the ’90s,” Brown explains. “Parents in 2021 are more liberal and accepting, but Marvin is old school. He didn’t even use the right term. He said ‘Lebanese’ instead of ‘lesbian.’ But the violence even shocked and scared Marvin. He snapped and lost it and then felt ashamed and sad, but it was too late. Those are the layers that make Marvin and the other characters very real.”

Marvin is loyal to his family, but he also has the capacity to hurt them. He raised Raq and Lou-Lou when their own parents struggled with drug addiction, but he has a hard time raising and getting to know Jukebox.

“As much as Marvin is trying to do right by his sister and brother, he has another side to him,” he says. “That’s why I had to play Marvin lighter at the top of the season because I knew he was going to go somewhere dark.”

The hasty actions of Jukebox’s father also shape who she will ultimately become.

“Now people can better appreciate why Jukebox became so tough as an adult because of the things she had to deal with growing up,” Brown concludes. “Her girlfriend died, and she had a strained relationship with her father. All of these layers help us understand why these characters turned out the way they did.”