If you enjoy the affable James Wolk (and who doesn’t?), then you likely tuned in to the premiere of NBC’s Ordinary Joe, starring Wolk (Zoo), Wolk (Mad Men) and Wolk (Lone Star).

The new drama takes the idea of “a fork in the road” and spins it into three different lives for Wolk’s titular character, who runs into classmate Amy (Under the Dome‘s Natalie Martinez) when he is late for his college graduation. They immediately bond over their big dreams (he wants to be the next Billy Joel, she wants to run for office). At the end of the ceremony, Joe has a choice to make: ask out Amy, meet up with his best friend Jenny (YOU‘s Elizabeth Lail), with whom he has an on-and-off thing, or go to dinner with his family. 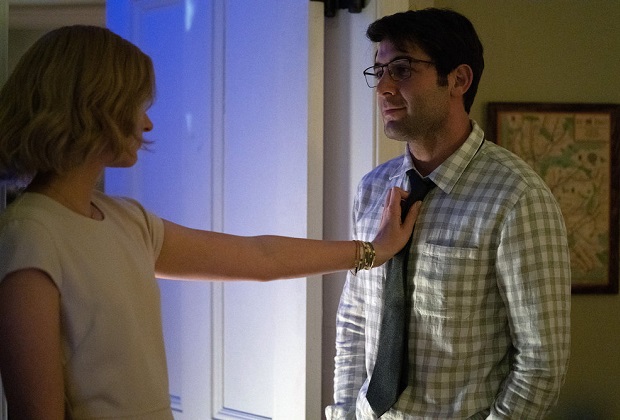 In the timeline where Joe meets Jenny at the beach, the two are married 10 years later and have a son whose medical needs mean that hospital nurse Joe is working night shifts for extra money. As a result, he and Jenny barely see each other, and their marriage is suffering to the point where paralegal Jenny hands Joe divorce papers after a trial separation. He’s got 40 days to respond, so Joe isn’t giving up hope yet, and neither are his best friend Eric (Chicago Fire‘s Charlie Barnett) and Amy, who are married in this reality. Joe shows up at their college reunion and asks Jenny to dance. As they sway, he confesses that he never talks about his feelings because he felt bad about how he ruined their relationship. “There you are, finally,” Jenny responds. While they’re not quite back together yet, things are definitely looking up for the pair.

Then there’s the world where Joe pursues Amy, they get married and he becomes a famous rock star. They seem to have it all: a loving marriage, professional success, a ridiculous-looking home. But Amy and Joe have been struggling to start a family. So when Amy gets pregnant with twins, it feels like things are too good to be true — and they are. Over dinner with Eric, who is a divorced single dad this time, Amy returns from the bathroom with bad news about the babies. 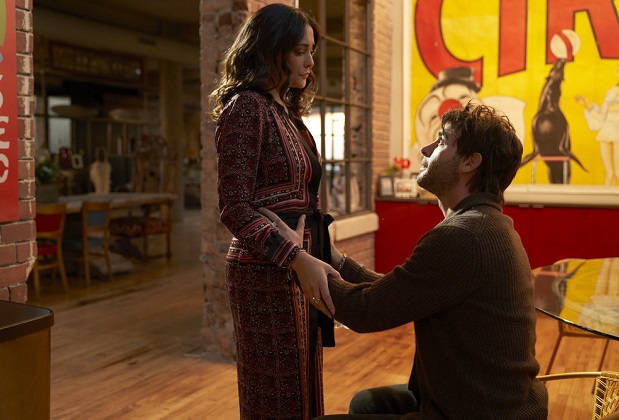 Meanwhile, Amy’s boss Congressman Diaz (Criminal Minds‘ Adam Rodriguez) announces that he’s got Parkinson’s and he wants Amy to run in his place. Joe worries about what such a demanding job would mean for any future attempts at a family. He’s always wanted to be a dad, he stresses. Amy wants to know if he would be OK if it’s just the two of them, and his silence is all the answer she needs. On that note, Joe heads to their reunion solo, where Jenny, now a partner at her law firm, shows up just in time to hear him perform a song. As the two catch up, Jenny tearfully confesses a secret she’s been holding on to: When she invited him to the beach after graduation, she was going to tell him that she was pregnant with his son. She gave up the baby for adoption, but Joe vows to find him. 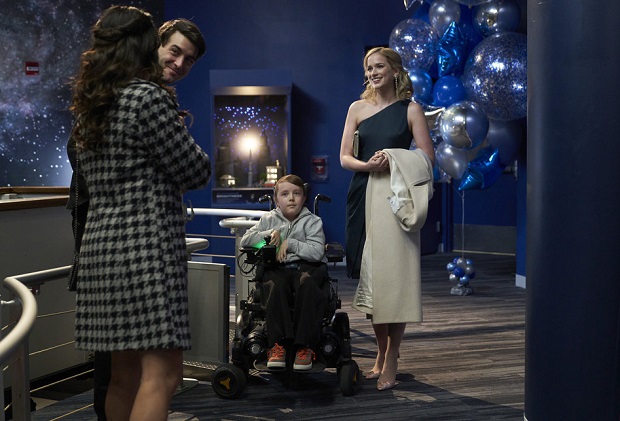 Finally, in the third “what if…?” scenario, Joe follows in his father’s footsteps and becomes a cop. His love life, however, is looking dour. Eric notes that Jenny RSVP-ed solo to the reunion, but Joe has someone else on his mind: When he saves Congressman Diaz from a gunman, he spots Amy in the suspect’s surveillance photos. (In another timeline, the congressman is actually shot, and nurse Joe treats him.) He agrees to a press conference in the hopes of reconnecting with Amy, who notices that he looks familiar. After Joe recalls their brief run-in, he says he’ll go to their college reunion if she does. Amy shows up at the event, and the two hit it off, eventually making their way out together when they run into Jenny… and the son she never told Joe about.

What did you think of the Ordinary Joe premiere? Grade it below, then hit the comments!