As CBS’ NCIS opened its 19th season on Monday (yes, Monday) night, it was sink or swim for Gibbs, who survived the actual bombing of his new boat but nonetheless was quite a bit worse for the wear.

Picking up shortly after the explosive events of May’s finale, Gibbs made it to shore, only to reveal that his torso had been impaled by a big ol’ shard of wood. After clocking the wound, Gibbs stumbled back into the lake and floated on his back, bleeding….

While McGee and Torres learned of and investigated the explosion of a small vessel registered to an “LJ GIBBS,” Gibbs himself came to, patched up and inside a strange, locked barn. He tried to break free, but toppled over from the pain of his fresh wound — and instantly found a woman standing over him with a rifle.

This Thelma, along with her husband Virgil, had found Gibbs, and the latter, being a retired veterinarian, patched him up. The couple was leery of their find, seeing as with his few conscious breaths he insisted, “No cops.” As such, they fretted he was part of a gang from the lake’s north shore. But when Gibbs keenly observed that a sheriff’s deputy who pulled up to ask Thelma some about the lake explosion in fact was an imposter, they began to believe his tale and let him make a phone call. Yet when Gibbs reached McGee via Marcie, all he did was task Tim with keeping his reporter friend safe — before abruptly hanging up.

Gifted with Thelma’s rifle but warned by Virgil about agitating his wound, Gibbs made tracks for an abandoned ranger station on the north shore, riding an old motorbike from the barn. At the ranger station, Gibbs found no gang members but Special Agent Jessica Knight — whom we had to remind ourselves had never met Gibbs before! — McGee and Torres, all of whom had been led to the location by the drift pattern of one of the serial killer’s found victims. When a trio of gang members soon enough arrived, Knight played Innocent Tourist, while McGee and Torres flanked the baddies with pistols drawn. For good measure, their “sniper” — Gibbs — scared the enterprising meth dealers with a few close shots, leading to their surrender. 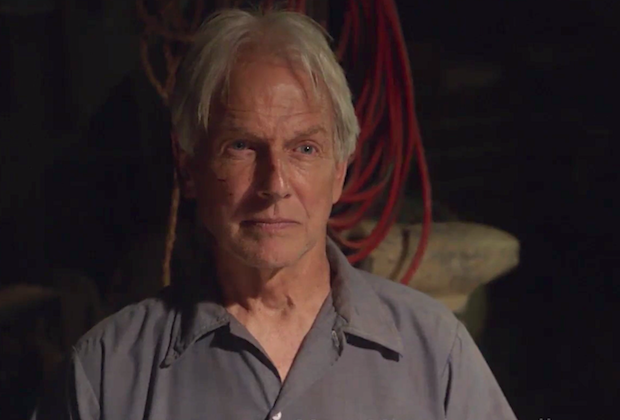 Some time after the scrape, McGee privately told Gibbs that “Rule 91 sucks, because it is in direct violation of Rule No. 1 — ‘Never screw over your partner.'” When Gibbs countered, “I’m not your partner” (having lost his badge and all) and also noted that the team “doesn’t need” him, McGee agreed, but maintained, “We’re better together.

“We’ve got a serial killer to catch,” McGee continued, “but in order to do that, we need to be a team. We need to be your team.” Gibbs let slip a faint grin, telling Tim, “I’m proud of you,” for always “pushing.”

“Does that mean you’re in?,” McGee asked, hopeful.

With barely a hint of a head nod, Gibbs replied, “Whaddya got?”

Elsewhere in the season premiere:

*Torres scouted out Bishop’s hastily vacated apartment, where he ran into Jimmy Palmer, who himself had only just learned of their colleague’s secret mission. When Torres fished a handgun out of a hiding place at Ellie’s, Jimmy surmised that Nick and Ellie had been more than coworkers.

*McGee and Torres picked Knight to join their investigation after Vance tried to force upon them some fresh-scrubbed FLETC golden boy.

*In the course of investigating Gibbs’ boat explosion, the team came to suspect that their former boss (he of the apparently holey socks!) and reporter Marcie had gotten… close.