Dick Wolf’s FBI Universe just got bigger! The franchise’s second spinoff, FBI: International, is set to debut this Tuesday as part of a three-way crossover with FBI and FBI: Most Wanted, starting at 8/7c on CBS.

“‘Epic’ is the perfect word for it,” showrunner Derek Haas tells TVLine of the three-hour event. “It stretches from America to Hungary to Croatia and back again. All the characters have to work together to stop the baddest of the bad.”

FBI: International (debuting Tuesday at 10 pm) follows the FBI Fly Team, a specialized group headquartered in Budapest that tracks and neutralizes threats against Americans, dropping in wherever that may be at a moment’s notice. “They move from country to country in Europe each week, partnering with international law enforcement to bring criminals to justice,” Haas explains. “Overall, it’s a fast-paced, action-packed thrill ride.” 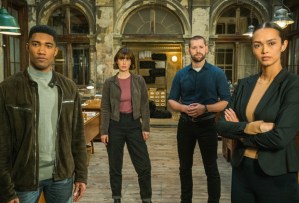 FBI: International stars Luke Kleintank (The Man in the High Castle, Bones) as Special Agent Scott Forrester, the team’s dedicated leader who puts his missions ahead of his personal life and “is rarely seen without the team’s ‘secret weapon’ – their trusty Schutzhund dog, Tank,” according to the official synopsis.

Tank is the franchise’s first four-legged series regular and will travel everywhere with the team. Trained in Schutzhund technique to help out whenever duty calls, the furry team player was a retired FBI cadaver dog before Forrester brought him to Europe.

According to Haas, Jaeger will be a huge part of the season as the team tackles everything from “a major cryptocurrency theft ring to a global sex trafficking organization that stretches across three shows.”

With the FBI franchise, the Law & Order franchise and #OneChicago all part of Dick Wolf’s expanded television universe, it leaves the potential for a mega eight-part crossover. And while Haas “can’t even think about it,” he notes that “knowing Dick Wolf, where there’s a will, there’s a way.”