Queens reigned and handmaids left empty-handed, when all was said and done at the 73rd Primetime Emmy Awards. 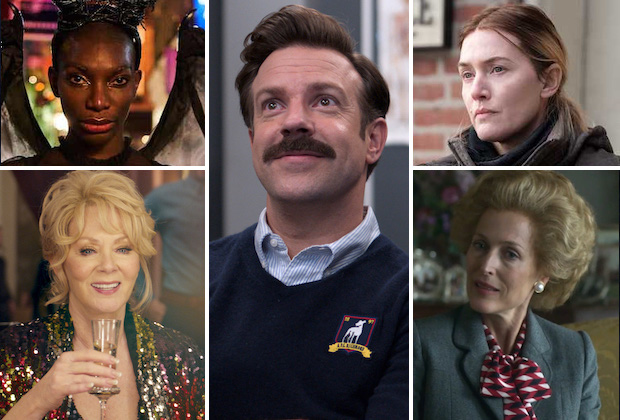 First up, accentuating the positive: Netflix’s The Crown and The Queen’s Gambit were this year’s winningest programs, grabbing gold 11 times each. NBC’s Saturday Night Live racked up eight total wins, followed by Apple TV+’s Ted Lasso and Disney+’s The Mandalorian, which collected seven each.

(Speaking of SNL, it once again “broke” its own record for the most career wins by any TV series, growing that gross to 94.)

Hulu and Amazon Prime, which respectively went into this year’s Emmys with 25 and 19 total nominations, both came up empty after last year combining for five wins.

Broadcast-TV’s struggle continues to be quite real. This year, NBC, ABC, Fox, CBS, The CW (which admittedly had zero nominations) and PBS combined for 13 total wins, down from last year’s 18 — and keep in mind, SNL accounted for eight of those.

With RuPaul’s Drag Race‘s win for Outstanding Competition Program, its eponymous producer broke the record for the most Emmy wins by a person of color, by earning his 11th.

Lastly, our sister site Gold Derby notes that by being named Lead Actress in a Comedy, Hacks‘ Jean Smart matched the great (and hopefully bubble-wrapped!) Betty White as the only person to complete the “comedy trifecta,” having now won an Emmy in the lead, supporting (Samantha Who?) and guest acting (Frasier, twice) categories.