The first episode of Dancing With the Stars‘ milestone 30th season is in the books, and it’s left me with one very pressing question: How was everybody so freakin’ good?

If you’ve watched a lot of DWTS in the past, you know to keep expectations low for the premiere episode, which usually features quite a few rocky routines (and at least one pro visibly counting out the steps for his or her celeb partner). Monday’s Season 30 debut, though, delivered an exceptionally high number of really excellent routines — so many, in fact, that I’m starting to seriously question some of the pre-season predictions I made. (The swagger on Iman Shumpert! Who knew?!)

Even better, Dancing has welcomed back a masked audience to the ballroom this season, and I didn’t realize how much I’d missed actual humans booing the judges instead of a weird, phantom audio recording doing it. Anyway! Before you give your thoughts on the premiere performances, here are some rapid-fire reactions from me:

Mel C and pro Gleb Savchenko (Cha-Cha): It was very smart of the show to lead with Mel C, and to give her a Spice Girls song as her soundtrack. Even with the weight of the season’s first performance on her shoulders, Mel was relaxed and precise — and I’m a little obsessed with her orange-and-blue costume, which was an homage to Sporty Spice’s outfit in the “Wannabe” music video. Judges’ Score: 27/40 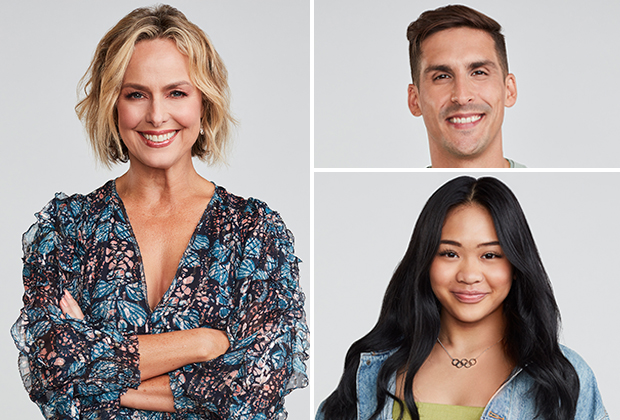 The Miz and pro Witney Carson (Cha-Cha): As I said in my initial predictions, The Miz seems like this season’s biggest wild card: a potential pleasant surprise, or a little too heavy-footed for the ballroom. On Monday, at least, the WWE wrestler was much more of the former, turning in a cha-cha that was unexpectedly light and breezy, if a tad manic at times. Judges’ Score: 24/40

Iman Shumpert and pro Daniella Karagach (Jive): Folks, my jaw dropped when I saw Iman keeping up with Daniella during those side-by-side sections. The speed! The grasp on choreography! If Iman stays in the competition, I hope Daniella challenges him with some more legitimate ballroom content, instead of padding routines with groovy interludes like she did here (and often did with last year’s partner, Nelly). But for a Week 1 jive? That was strong. Judges’ Score: 21/40

Olivia Jade and pro Val Chmerkovskiy (Salsa): It’ll be very interesting to see how the voting audience responds to Olivia, especially after a rehearsal package loaded with “strong work ethic” and “do better” sound bites. Her dancing on its own, though, was very, very good. Judges’ Score: 25/40

Jimmie Allen and pro Emma Slater (Tango): Another dance for the “extremely pleasant surprise” category! I expected a certain stiffness, and perhaps a little sheepishness, from Jimmie, especially with a style that requires intensity and commitment. But nope: He can body-roll with the best of ’em, and he was a solid partner for Emma throughout the routine. Judges’ Score: 22/30

Melora Hardin and pro Artem Chigvintsev (Tango): This premiere was so strong across the board that I’m really hoping Melora’s few balance hiccups don’t impact her chances of advancing too much. Aside from a couple of wobbles, the Bold Type actress was strong and elegant, without veering over into cartoonish tango seriousness. Judges’ Score: 26/40

Suni Lee and pro Sasha Farber (Jive): I’m so excited about this Suni/Sasha partnership; every season, Sasha is so well-attuned to his partners’ strengths and weaknesses that I can’t wait to see the choreography risks he takes with an athletic partner like Suni. The Olympic gymnast didn’t always look like she was having a blast on the dance floor, but her technical skill — and that split halfway through the number! — was astonishing. Judges’ Score: 28/40

Cody Rigsby and pro Cheryl Burke (Tango): Given how loose and comfortable Cody seemed in the lead-up to his performance, I was surprised how nervous he came off at parts of this tango. There’s no doubt he’s got the dancing know-how, though, and a terrific partner in Cheryl; if Cody gets the votes to advance, here’s hoping he shakes off those nerves and channels his usual Peloton authority out there. Judges’ Score: 24/40 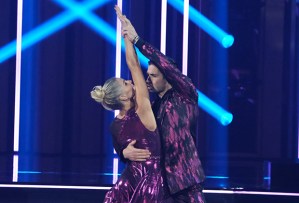 Amanda Kloots and pro Alan Bersten (Tango, pictured): Amanda was my pre-season pick to win the whole shebang… and after Monday’s commanding, sure-footed tango, I stand by it! Also, let’s not sleep on Alan as a partner. He’s got exciting choreography ideas each season, and I’m jazzed to see what he can do when paired with someone as capable as Amanda. Judges’ Score: 28/40

Martin Kove and Britt Stewart (Paso Doble): We all know this was the evening’s biggest “oof” moment. No need to rip into it. The dude is 75. Judges’ Score: 13/40

Kenya Moore and pro Brandon Armstrong (Foxtrot): The first foxtrot of the broadcast was exceedingly lovely. Kenya doesn’t have any ballroom experience at all, but you’d never know that from her smooth transitions and clean lines. Judges’ Score: 26/40

Christine Chiu and pro Pasha Pashkov (Tango): In a crowd of impressive tangoes during the premiere, Christine and Pasha’s struck me as the most forgettable, content-wise. Christine does, however, have a really beautiful flexibility in her execution, and I hope she gets a chance to stick around and showcase even more of the potential glimpsed in this performance. Judges’ Score: 25/40

Matt James and pro Lindsay Arnold (Cha-Cha): Perhaps in a weaker premiere episode, Matt would have stuck out as the night’s most unexpected joy. On this stacked show? I think Iman still gets that superlative. Nevertheless, Matt’s got a fun confidence to his movements, and a multi-time finalist like Lindsay is an excellent partner for him. Now, who’s going to tell him to stop lip-syncing with the song? Judges’ Score: 24/40

Brian Austin Green and pro Sharna Burgess (Foxtrot): Since Brian and Sharna are a real couple outside of the ballroom, they run the risk of getting graded on a curve here: Their chemistry is palpable, and that kiss at the end was adorable, and it could all feel so novel that viewers cut them a little more slack than usual. But Brian does appear to have some serious skill lurking underneath the surface. Those port de bras? So refined! Assuming his and Sharna’s relationship doesn’t steal too much of the spotlight, there’s major dark horse potential here. Judges’ Score: 24/40

JoJo Siwa and pro Jenna Johnson (Quickstep): We had to know Dancing was saving this historic partnership for last on Premiere Night, and it didn’t disappoint. There was a slip in the middle, but JoJo didn’t appear rattled by it at all, and her ability to keep up with Jenna on those lightning-fast quickstep moves never came into question. (That said, I think an eight from Carrie Ann Inaba was probably a little too generous. One of them fell!) Judges’ Score: 29/40

With that, I turn it over to you! Which Dancing couple(s) impressed you the most on Premiere Night? Drop a comment below with your thoughts!