Batwoman invites you to join Ryan & Co. for a mad tea party in Season 3.

The CW unveiled a new trailer on Monday, teasing the arrival of a new Gotham villain: the chaotic and whimsical Mad Hatter (Schmigadoon! and Supernatural‘s Amitai Marmorstein). Armed with a duffle bag full of Alice in Wonderland masks and an appetite for trouble, we’re guessing he’s not there to sit around and gossip over tea.  Curiouser and curiouser, indeed!

The Arrowverse drama’s new season, which premieres Wednesday, Oct. 13 at 9/8c, will find the Bat Team assembling to recover the stolen Bat trophies that went missing towards the end of Season 2. Plus, Ryan will have to figure out whether Alice was telling the truth or just messing with her head when she dropped the bombshell that Ryan’s birth mother was still alive. 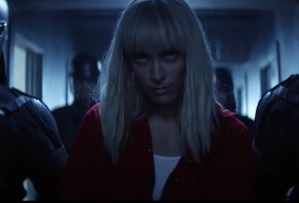 Alice, meanwhile, faces a long sentence in Arkham Asylum for her various crimes over the years — and according to the trailer, she will spend the rest of her life in solitary confinement if she attempts to escape. And yet the blonde murderess isn’t sweating her current predicament, or the monitoring device currently strapped to her ankle.

“Does this wreck my ensemble?” she asks in the preview.

Season 3 will bring in a bevy of new faces including Jada Jet (played by Robin Givens), a business tycoon who may or may not be Ryan Wilder’s potential birth mother; Marquis Jet (Law and Order: Organized Crime’s Nick Creegan), Jada’s son and Ryan’s potential brother; Gotham’s Victoria Cartagena as Renee Montoya, a former GCPD detective who’s also working to recover the Bat trophies; and Jane the Virgin alum Bridget Regan as Pamela Isley aka Poison Ivy.