Sunday’s episode of The Walking Dead led Eugene out on a limb, took Aaron right up to the edge, brought Maggie and Negan to the point of fisticuffs and delivered to Carol a sliver of hope — and the recap below has all the details.

‘I HAVEN’T MET A WHISPERER THAT WASN’T A LIAR’ | After a stylized prologue in which Aaron and Gracie were stalked in his nightmare by Wolves, Whisperers and everything in between, “Out of the Ashes” sent our one-armed protagonist to the ruins of Hilltop with Carol, Lydia and Jerry in hopes of retrieving tools to fix Alexandria’s increasingly flimsy walls. There, they apprehended a leftover Whisperer named Keith who seemed to be herding walkers nowhere fast. “I’m all that’s left,” he insisted. But since Lydia could only halfheartedly vouch for him, he was thrown in the cellar… where there were — surprise — more Whisperers. Spotting Nabila’s scarf, Jerry realized that, scared as the group appeared to be, they had been among the villains who attacked Alexandria. As he put it, “They burned down our home.” Panicked, Keith attacked Aaron and wound up being threatened with a walker on a pitchfork. If Keith didn’t reveal how many Whisperers there still were, Aaron was going to let the creature bite his hand. And, in fact, he did! Before Aaron could go any further — how much further could there have been? — Carol put an arrow through the walker’s head and warned her friend not to follow the path that she had after Henry’s murder. Before our heroes left Hilltop, Keith, despite being down a hand, endeavored to prove that he and his group had changed — by revealing that he’d seen Connie “hurt but alive” near Alpha’s screaming cave. So needless to say, that would be Carol & Co’s next stop. 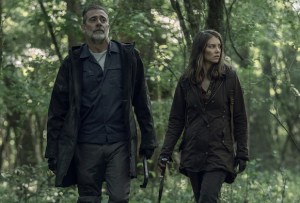 ‘IF I STAY ALIVE, IT’LL BE IN SPITE OF YOU, NOT BECAUSE OF YOU’ | Elsewhere, Negan made a futile attempt to get along with Maggie en route to the satellite post. But, understandably, she so wasn’t having it that he finally asked why she hadn’t just put him down already. She wondered why, too, she had to admit. Once they reached the house at which they were supposed to rendezvous with the rest of their group, Negan began making noises about taking off before the Reapers caught up with them. Maggie, however, wasn’t eager to cut her losses on the mission, not when “those losses are my people.” Come sundown, Negan started packing to go, and push literally came to shove between him and Maggie… just as Gabriel and Elijah arrived. Once she’d filled them in on what she knew about the others — not damn much — Gabriel’s attitude was all, “So we wait.” Natch, Negan’s sigh was so heavy, it could’ve rustled the curtains. Back in Alexandria, Judith tried to keep her chin up, teaching swordsmanship and warning brats against teasing walkers at the walls, but man, she was having a crap day. First, a bully told her that she talked too much. “No wonder your mom abandoned you!” (Cue Judith pulling a knife.) Then, she found her and Carl’s wooden handprints broken apart. Sweetly, Rosita demonstrated her maternal instinct by reassuring the little girl, “Pieces of wood are nice, but you don’t need that to remember how much [Carl or Rick] loved you.” Plus, Rosita added, she was really good at fixing things. 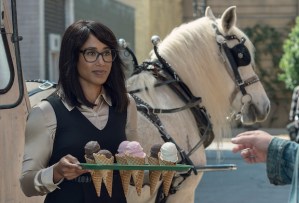 ‘THE FUTURE STARTS HERE’ | In the Commonwealth, after Eugene, Yumiko, Ezekiel and Princess watched Director of Ops Lance Hornsby (Josh Hamilton) in an orientation video straight out of Stranger Things, they were given their job and housing assignments — a bit of an issue, as “permanent residency,” the brainiac noted, “was not our intent.” While Princess and Ezekiel sought out their case worker, Yumiko, who hadn’t gotten a job but an invitation to discuss “opportunities” with an Edmund Widgeway at the State of Affairs, reconnected with brother Tomi (Ian Anthony Dale), who had given up surgery to become a baker. Come again? He was content, he said. “It’s the one gift I got out of the world falling apart. Please — don’t ruin this for me.” Nearby, “Stephanie” was showing Eugene around when he crossed paths, fleetingly, with the woman that I think is the real Stephanie (Margot Bingham, pictured). If “Stephanie” was just Stephanie in air quotes, though, she did put on a good show, lightly flirting with Eugene and offering to break the rules so that he could radio his friends back in Alexandria. Busted mid-call with Rosita and Judith by Mercer — despite Princess’ cute attempt to distract him — Eugene & Co. suddenly found themselves arrested and facing the likelihood of banishment. That is, they were until Lance intervened. Thanks to “Stephanie,” he’d saved them from being kicked out, she said. But nevertheless, “you’ll have to pay for what you’ve done one way or another.”

So, what did you think of the hodgepodge that was “Out of the Ashes”? Would you, like Carol, have stopped Aaron from killing Keith? Are you buying that “Stephanie” is Stephanie? And why doesn’t Maggie just off Negan already?