Power Book III‘s Jukebox isn’t interested in the blame game when it comes to her girlfriend Nicole’s tragic overdose death and she let Kanan know as much in last week’s installment of the Starz drama.

“It’s not your fault, Kanan,” Jukebox told her cousin after Nicole (Annabelle Zasowski) stole and smoked a crack rock from his lethal batch. “I don’t even think I can blame myself. It’s this place … and the f—ed up life we’re living in.”

Jukebox’s heartbreaking and prophetic words will further play out this Sunday at 8/7c, when Raq (Patina Miller) sends Kanan and Jukebox on two separate missions that will shape and seal their fates. MeKai Curtis and Hailey Kilgore, who play Kanan and Jukebox respectively, say fans are about to get a more intimate examination of who their characters were — and who they ultimately become. 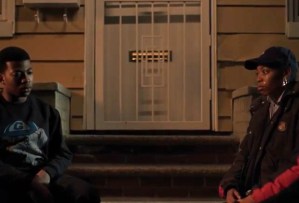 After weeks of telling Kanan to lay in the cut, Raq switches gears when Lou-Lou (Malcolm M. Mays) is unable to help. Instead of Kanan being suspicious or afraid, he follows the orders he’s been eagerly awaiting, Curtis foreshadows.

“He watches how his mother and uncles do things and decides there is only one way to protect them and provide for them,” the former Disney actor previews. “At first, Raq pushed against Kanan’s destiny and now she embraces it. Kanan is young and naive and bullied his way into the family business. Everything he does is off impulse and emotion and this time, you’re going to see him make a choice based on survival.”

As for Jukebox, she will meet with her aunt Raq and her father Marvin (London Brown) and walk away with very different outcomes that make her love Raq more and love Marvin less.

“It’s so exciting to be a part of this origin story,” Kilgore shares. “We are starting at ground zero. It’s like taking a picture, stripping away the colors and then painting it in our own way.”

Kilgore says Jukebox’s cousin/sibling bond with Kanan as well as the motherly influence Raq has on her character has felt organic from the start. For instance, Miller played Kilgore’s mother in a Hollywood Bowl production of Into the Woods two years ago. “I love Mekai and Patina,” the actress surmises. “We really click as a family.”

Want scoop on Power Book III, or for any other show? Email InsideLine@tvline.com and your question may be answered via Matt’s Inside Line.