After two weeks of polls and very passionate comment sections, TVLine’s bracket tournament to decide The CW’s Best Show Ever recently came down to the men of Supernatural versus Superman himself.

Now, after more than 57,000 (!) votes were cast in the final face-off between Smallville and Supernatural, it’s time to reveal what you chose as The CW’s all-time greatest series, in celebration of the network’s 15-year anniversary today. The big winner is… Supernatural!

“For The CW to have had so many shows over the last 15 years that have earned such passion from the legions of fans, it is really a profound testament to everyone who put their blood, sweat and tears into creating them, from the casts, the creators, the writers and crew, and everyone at the network and studios,” CW chairman and CEO Mark Pedowitz told TVLine ahead of the final vote tally. “No matter who comes out on top, we are grateful to have been associated with them all.”

Supernatural — which aired on The WB for its first season — has the distinction of being The CW’s longest-running series, sticking around for 15 total seasons from 2005 through 2020. The drama starred Jared Padalecki and Jensen Ackles as Sam and Dean Winchester, two brothers who took up the family business of hunting supernatural creatures across the United States. Their cross-country road trip in Dean’s beloved Chevy Impala initially began as a search for their missing father (played by Jeffrey Dean Morgan), but the brothers went on to encounter even heavier hitters in their adventures, including God, Death himself, the actual apocalypse… and Scooby-Doo, in one case. The show wrapped its run on Nov. 19, 2020, with 327 episodes under its belt.

Here is TVLine’s Keisha Hatchett (and Becky, of course) touting the news:

Now, some fun facts about our tournament:

* Nearly 500,000 votes were cast throughout the tournament (in addition to the tens of thousands cast during the vote-in elimination round).

* The widest margin of victory in any given matchup was Supernatural‘s 90 percent to 10 percent besting of Batwoman in Round 1. The tightest contest came when One Tree Hill squeaked past The Originals in the Sweet 16, by a 51 to 49 percent margin.

* But really, the big winner here is Ackles, who appeared on both Smallville (as high school football coach Jason Teague) and Supernatural, and as such simply couldn’t lose this tournament. A champion if there ever were one.

Take a look at our final bracket below to revisit all of the results, then drop a comment below with your thoughts on Supernatural‘s big win — and thanks for your devoted participation in our tournament, TVLiners! 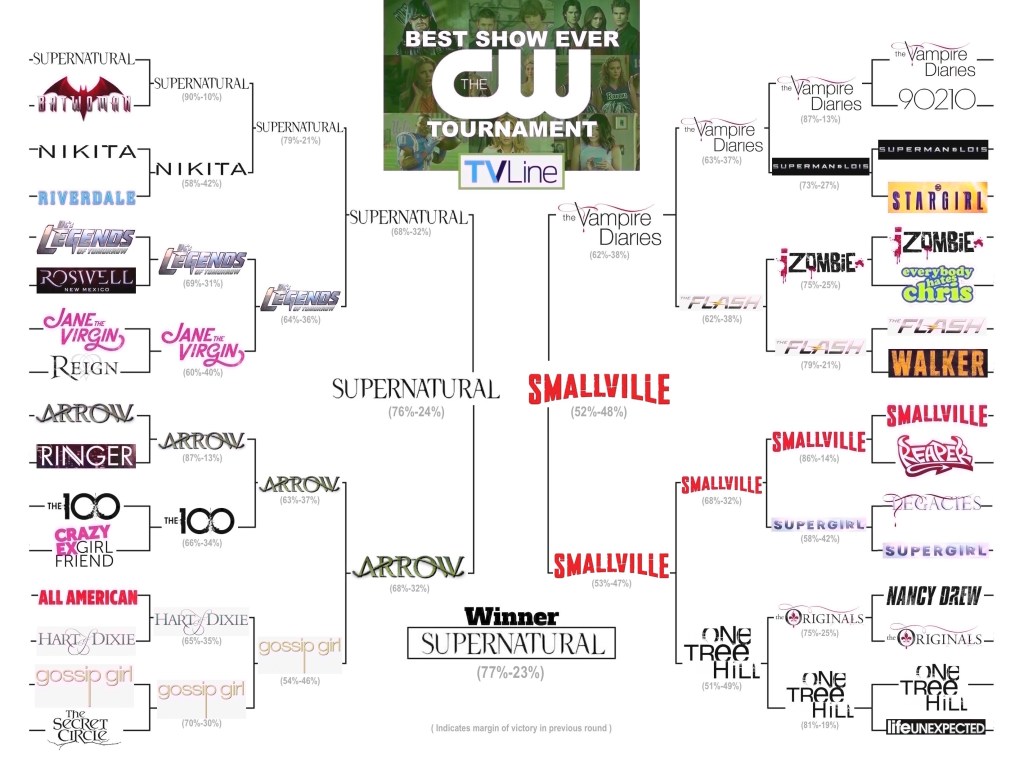