Tohn, a former American Idol contestant and GLOW actress, wanted to give kids who no longer have arts education programs in their schools a colorful and unassuming way to learn about various musical instruments and styles. That’s when she tested out a prototype on Bell’s oldest daughter Lincoln with the help of her creative partner Michael Scharf.

Bell, who overheard the music, saw the drawings and loved the way it resonated with her daughter, then encouraged Tohn and Scharf to think about turning their idea into a TV series, and Do, Re & Mi was born. The animated offering, which relies on its three adorable and brightly colored titular birds to teach preschoolers about everything from rhythm to genre, premieres today on Amazon Prime and boasts Bell as both an executive producer and the voice of Mi, an upbeat bluebird.

“Arts education in schools is always the first thing to go when schools face budget cuts,” Tohn tells TVLine. “Mike and I wanted to create something that would take the place of all of these music and art programs that are being erased at schools. It was an awesome undertaking that would have remained the dream of two artsy hippies if not for Kristen, Gaumont and Amazon making it a reality. I’m a creative who didn’t think to ask one of my closest friends, who also happens to be the voice of Princess Anna, for help. Thankfully, she helped me anyway.” 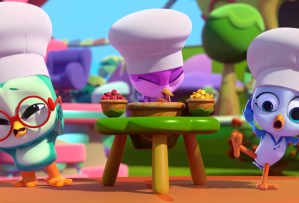 In addition to co-creating the show, Tohn voices Re the chatty hummingbird, and Community and Harry Potter vet Luke Youngblood does the honors as Do, a lovable owl. Saturday Night Live alum Fred Armisen guests as an outspoken peacock named Juan.

The series, which also offers an interactive game and other at-home educational components, focuses on a different type of music per episode and kicks off its debut with six installments. Tohn and music supervisor David Schuler handpicked the genres, and Tohn even tries her hand at rapping in Episode 5.

“Every episode features a new genre and emotional lesson,” Tohn adds. “The most challenging was the opera episode because the entire episode was sung. We had to work very closely with the script writer to make sure it was as satisfying as it was challenging.”

Youngblood, who years ago attracted fans with his small-but-hilarious turn as Magnitude on Community, says he hopes the series fills young viewers with both inspiration and information.

“When I was a kid, I remember how much music education helped me as a performer and a human being,” the London native exclaims. “Our show taps into that and imparts wisdom. My character Do, for instance, isn’t the best flier, but his friends are there to lift him up. It’s the kind of symbolic and subtle lesson that teaches kids when things get difficult, there are ways to work out solutions and overcome it.”

Having played Magnitude in the past also helped in some ways, Youngblood says.

“It’s really cool that this character who said one word twice [Pop! Pop!] could make such an impact,” Youngblood says with a laugh. “Being on the set of Community allowed me to watch a lot of the other actors and observe their comedic timing, and I learned the rhythm of when to drop the punchline. The more you do it, the better you become, and the more you’re able to integrate that into your own work.”

In that way, comedy and music are a lot alike, Youngblood observes.

“You can teach so much through music and humor,” the amateur steelpan drummer concludes. “Do, Re & Mi is such a collaborative project, and it was so nice to bounce ideas off of each other. That spirit of family comes across in this beautiful world we were able to build.”