All of Karen’s relationships are complicated on Tyler Perry’s Sistas. Now that her on-again-off-again romance with Zac is officially over, Aaron has swooped in to ask for her hand in marriage.

But Karen didn’t take the minister’s proposal seriously, as fans saw in the Season 3 midseason finale, and she turned down the romantic gesture from Aaron (Burn Notice‘s Kevin A. Walton) — and his way of putting an end to their “sinful” premarital sex. Ebony Obsidian, who plays Karen, says viewers will better understand her character’s polite rejection when the BET drama returns Wednesday, Oct. 13.

“I love what Aaron does for Karen’s development as a woman,” Obsidian tells TVLine. “She is able to look at him and see someone she wants to possibly marry one day without feeling the need to rush into anything.”

Obsidian says both Aaron and Karen have brought their fair share of baggage into their relationship, all of which has to be sorted out and forgiven. 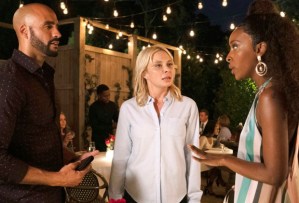 “Aaron had baggage with his late ex-wife and his ex-brother-in-law,” Obsidian excitedly recalls. “That strange man [the brother-in-law] was in her house, and that’s some very dangerous baggage. A lot of people would have told Aaron they never wanted to see him again. That s–t was crazy.”

Karen, however, is cut from a different cloth because of her past experiences, the actress explains.

“A woman like Karen has been in the trenches,” Obsidian adds. “You’re not going to get the same reaction from her. After being with Zac, who cheated on her and gave her an STD, she thinks Aaron’s past is normal. Karen also sees Aaron for who he is, and he sees her for who she is.”

Aaron and Karen are also candid with each other, and that could lead to a stronger bond as well. 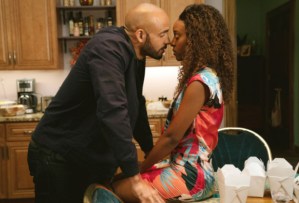 “So far, Aaron has been a man of his word and done everything he’s said he was going to do,” she continues. “He’s not perfect, but he’s also been so non-judgmental throughout everything Karen has gone through with Zac and even with Andi. The conversations that they have are honest and mature but never judgmental. If they keep talking it out, they might be able to make things work.”

Do you think Karen should accept Aaron’s marriage proposal if he asks again on Tyler Perry’s Sistas? Or should they keep taking things slowly? Drop your thoughts in the comments.