This week on DC’s Stargirl, Cindy revealed her plan for Mike, leading to a brutal clash between the JSA and Injustice Unlimited… and other vested parties. Who didn’t walk away alive?

First, there was a bit of table setting, as the forever-glowering Isaac gave waitress Yolanda some lip about what the JSA did to his parents, and Artemis did same with Beth. Courtney and Pat meanwhile volunteered to clean up the high school art room, where they discovered a painting of Cindy wielding the Black Diamond. Stopping by the art room, Cameron confirmed that Cindy is back in town, and that he in fact had a “weird” run-in with her the other day. Putting two and two together, Pat and Courtney split up to respectively fetch S.T.R.I.P.E. and the rest of the JSA.

Arriving at the Pit Stop, Pat was painfully bowled over by Isaac’s sonic strumming of his mother’s violin. Artemis joined in, whaling on Pat, who (at first) refused to take swings at a kid. Artemis stopped Isaac from killing a concussed Pat (“He’s my dad’s friend,” aww), then got to ripping S.T.R.I.P.E. apart.  Mike meanwhile was rummaging around Zeke’s junkyard for a S.T.R.I.P.E. upgrade when Cindy showed up to — no, LOL, not recruit him — but simply use him as bait.

At unconscious Pat’s hospital bedside with Barbara, Courtney kicked herself for not sticking with her stepdad after learning about the Cindy/Eclipso alliance. Court then got a call from Mike, though it was Cindy on the other end — inviting her to meet up at the cafeteria that night to settle things. Or else Mike dies. Distraught, Barbara made us of Richard Swift’s business card and summoned The Shade, who was indifferent to Stargirl’s plight until he learned that arch enemy Cindy had the Black Diamond in her possession. 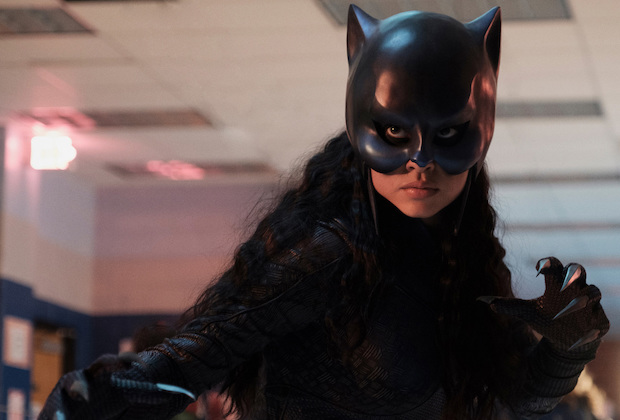 Soon after arriving at the cafeteria, Courtney, Yolanda and Rick started slugging it out with Cindy/Shiv, Artemis and Isaac in a breathless six-minute fight sequence that featured some nifty match cuts and really did a number on a washroom. Beth meanwhile found and freed Mike, who had been strung up in a closet. Injustice Unlimited was not down for the count, though, as Cindy whipped out the Black Diamond — which is right when the shadowy Shade snaked into the cafeteria, eventually taking his natty, top-hatted form. The Shade chided Cindy for using the Black Diamond in some “trivial, teenage gang fight,” and invited her to turn it over to him. Eclipso in turn told Cindy “it is time… for me,” at which point he semi-possessed her and attacked The Shade. Seeing their frenemy in peril, Courtney charged at Cindy, but when the tip of the cosmic staff hit and shattered the Black Diamond, it apparently released Eclipso in his corporeal form!

Cindy went to stab Eclipso, but he rrrrripped a shiv from one of her arms, and then flung it at Isaac. After libbing Cindy aside, Eclipso walked over to injured Isaac and did what he did to Cindy’s stepmom, inhaling/eating the lad’s soul. Eclipso then took a shard of the diamond and flung it at Cindy’s feet, creating a quicksand-like pool of goo into which she sank and disappeared, despite Courtney’s attempt to help. Eclipso then flung The Shade into a puff of smoke, and shorted out the cosmic staff when Courtney came charging, before scampering away on all fours.

In the aftermath that night, we saw The Shade doubled over outside the American Dream offices, before he again disappeared into a smattering of smoke, while Courtney gave hospitalized Pat the 411 on Cindy and Isaac’s grim fates. Realizing that Eclipso was using Cindy to his own end, Pat presumed that the evil entity will now aim to “corrupt, feed, and gain power.”

Spooked by the day’s events, Mike insisted Pat he wants his “own S.T.R.I.P.E.,” so that he isn’t scared and helpless moving forward. Meanwhile at the Pit Stop, as Rick recouped from what Beth’s goggles diagnosed as a broken rib, Yolanda observed that Isaac wasn’t “evil” and didn’t deserve to die — but Eclipso very much does.

The episode’s very final sequence was a discomfiting one, as Eclipso lurched down an alleyway before transforming into the cherubic-yet-creepy af Bruce from the series premiere’s flashback. The wee lad then skipped down main street, cackling….

What did you think of “Summer School: Episode Six”?