The apocalypse is here, and what transpires after will make or break humanity as we know it.

Welcome to the world of Y: The Last Man, the looong-awaited adaptation of Brian K. Vaughn and Pia Guerra’s beloved graphic novel. Though the TV series had been stuck in development hell for years, viewers can finally feast their eyes on its first three episodes (now streaming via FX on Hulu), and witness the plight of the last remaining (cisgender) male and his adorable pet monkey.

The premiere episode introduces us to the dystopian world, in which a cataclysmic event takes out almost every living male, leaving the world’s female counterparts to dig through the rubble and pave a new path forward. But Yorick (Warcraft‘s Ben Schnetzer), fumbling about in the mess of the now-burning society, sets out in search of his missing girlfriend, not knowing the brutal reality of the situation: That he’s actually the only male left alive with a Y chromosome.

We also meet Y’s mother, congresswoman Jennifer Brown (House of Cards‘ Diane Lane), who, by default, steps into the role of United States president. Despite the pressures she faces to pick up the pieces of the crumbling country, the stakes are raised even higher when she realizes that her son remains among the living. After discussing the matter with a secret federal agent known only as Agent 355 (NOS4A2’s Ashley Romans), Jennifer sends Yorick and the agent to Boston, hoping they can track down a renowned geneticist who might be able to answer some of their lingering questions about the tragic event and Y’s existence.

So how will Yorick deal with the fact that the entire human race’s fate lies squarely in his hands? TVLine spoke with Schnetzer to get his take on the character’s motivations, and what’s to come for this last man and his monkey.

TVLINE | So were you a fan of the comics before stepping into this role?
BEN SCHNETZER | I had heard of it, but hadn’t read it. Once I got the part, I read all of it, and dipped back into it throughout the season. There are certain storylines I’ll find in the graphic novel, as we see them take shape in the series, just as a refresher to jog some things loose. It’s great source material, and a great reference for us. We were getting ready to start shooting this in March of 2020 when things got put on hold on account of the pandemic, and so by the time we had started filming, a lot of us were like, “We should probably reread that thing!” because it had been a while!

TVLINE | When we first meet Yorick before the event, he seems erratic and maybe even a bit directionless. How would you describe him at the very beginning?
I think erratic and directionless are two pretty apt words to describe Yorick. So often we find characters searching for something more, but they don’t know what it is, whether it’s a Luke Skywalker or a Frodo… characters who are looking beyond the confines of their smallish worlds. When we find Yorick, I don’t think he’s searching for a whole lot. He’s happy being a good boyfriend. He’s happy paying the rent on time and making a living. He has ambition, I don’t mean to sell that short, but there is a line in Episode 3 when he’s talking to his mother, where he says to her in no uncertain terms, “Maybe I’m not as ambitious as you are.” When this event takes place and he gets shouldered with this burden, it was really not one he was searching for, and he certainly would not have volunteered for it. But he’s taking it and making it one day at a time. 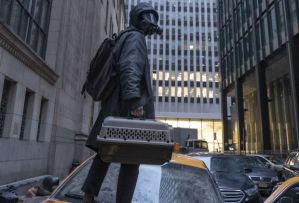 TVLINE | He seems very short-term goal-oriented. When will Yorick realize that he’s a part of something much greater than himself?
I think the penny drops bit-by-bit throughout the first season, and that’s a really good way to phrase it, that he’s kind of more short-term goal-oriented. I think things start to shift around the back half of the first season. Starting out, Yorick’s less concerned with things on a global scale; he’s thinking much more domestically and personally. But as they traverse this post-event world, he starts to realize more and more that he has responsibilities that he’s been burdened with that he needs to learn how to carry.

There’s a line in the graphic novel that I love, where he says: “With little power comes little responsibility.” I think that speaks to where Yorick would like to see himself, but deep down he’s got more resources and potential than he gives himself credit for.

TVLINE | In Episode 3, Yorick says, “I’m just a guy, I’m not special.” Are we to believe his self-assessment there?
It’s definitely reflective of where his state of mind is at that point. There’s a sequence that leads into that scene where he’s wandering through the Pentagon, and he sees this hall that has an In Memoriam wall. He sees all of these people who have passed away who he thinks would’ve made a better candidate to be in his shoes, and who he thinks are more deserving than he is. I think a real cross that he bears throughout the series is questioning why things played out the way they have, and why he’s in the position he’s in. That really made the character a lot of fun. The mission that he’s on with Agent 355, it’s an obstacle for him. He doesn’t want to be on it, and he’s on it for very particular reasons. If it were up to him, the resources spent getting them to Boston would be better spent getting him to find his girlfriend who he’s been separated from. That’s really the fuel behind Yorick’s journey, particularly throughout the first half of the season.

TVLINE | Agent 355 and Yorick seem to have very different moral compasses. What can you say about their relationship going forward, and will these complicated morals ever come between them?
That’s a really good question, and a real sticking point. I don’t think he’s a holier-than-thou type guy, but Yorick does have a set of morals that are very clear to him. He’s got a right and wrong way of thinking, and he’s comfortable looking at things that way. Things are much more ambiguous and much more muddled with 355, and the way that she works. There’s a lot of shades of gray in this new world that makes Yorick very uncomfortable. He’s more comfortable with a clear-cut right and wrong moral compass, and maybe it’s hard for him — talking about short-term thinking — to look at the bigger picture and actually see that for the greater good, we might have to do some things that feel kind of bad.

It’s a little bit like John Connor and the Terminator in T2 when John’s telling him, “You can’t just kill people!” I remember [showrunner and executive producer] Eli [Clark] talking about that movie a lot when we were prepping to shoot. She was like, “Rewatch that movie, you guys!” I don’t know what that says about Yorick, that his parallel is a 12-year-old boy [Laughs], but it’s not an awful comparison.