There is no such thing as a perfect marriage. However, the growing discontent between Mira and Jonathan in HBO and Hagai Levi’s modern adaptation of Ingmar Bergman’s 1973 classic Scenes From a Marriage is so realistic and raw that it will make all sorts of couples question the strength of their unions.

The tension first surfaced in Sunday’s premiere when Mira begrudgingly agreed to a doctorate-student interview alongside Jonathan. After asking about attributes the husband and wife couldn’t imagine themselves without, the student revealed that she was focusing on married couples where the wife was the primary breadwinner. Jonathan and Mira fit the bill because he’s a college professor who cares primarily for their four-year-old daughter Ava, and she’s a tech executive who works around the clock.

Mira, who has been married to Jonathan for 10 years, grew increasingly testy when the subject of childcare came up, as well as when she was listing attributes. For instance, she subconsciously described herself as a mother twice. She also kept checking her phone, making it unclear if she was texting with someone from work or perhaps a secret lover. (More on that later.) 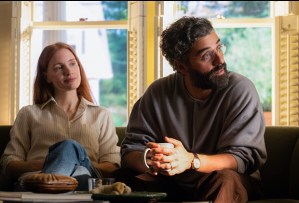 Either way, the student’s questions unnerved Mira a lot more than they bothered Jonathan, and after the interview was over, it was all Mira could talk about with their friends Kate and Peter that night during dinner. Unfortunately, talking about the state of their marriage inspired their polyamorous friends to do the same, and Kate revealed she was heartbroken over her side boo Nathan dumping her. This noticeably bothered her hubby Peter, who said he’d never fallen in love with his mistresses and the arrangement only worked if love was off the table.

At one point, Kate started yelling at a passive-aggressive Peter, and Mira separated the two by taking Kate upstairs to her and Jonathan’s bedroom. This is when Mira checked in on her friend and said Kate had only opened up their marriage because Peter kept cheating on her. But Kate said it was more complicated than that and she started desiring Peter more after she became involved with Nathan. Somewhere along the way, their wires got crossed, and Kate started kissing Mira, who quickly rebuffed the sexy gesture, causing Kate to apologize for being lusty and drunk.

When the wives rejoined their husbands downstairs, a tipsy Peter was yelling so loudly about why monogamy was a sham, Mira had to ask him to leave because he’d startled Ava awake. Kate and Peter left, Ava fell back asleep and Mira and Jonathan were finally alone, which was a good thing because Mira had news. She was pregnant. A birth control snafu and the assumption that being nearly 40 would render her less fertile had landed them in a scary and unexpected place. 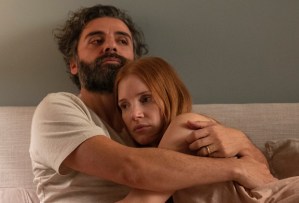 Mira had been texting with her doctor during the interview earlier that day and was trying to decide what she should do. On one hand, Ava said she wanted a little sister. But on the other hand, Mira had struggled with both postpartum depression and career setbacks after her extended maternity leave with Ava. Jonathan panicked and had an asthma attack upon hearing the news initially, but then started getting excited about the possibility of having another baby.

And it seemed like Mira was starting to entertain the idea of expanding their family, too, until the very next scene when Mira and Jonathan sat in her doctor’s office while her doctor explained the steps and side effects of chemical abortions. Jonathan tried to put on a brave face. He even rushed to the soda machine to get her something to wash down the pills, but he was clearly heartbroken about Mira’s decision. Mira struggled mightily as well, and the gravity of her choice became so heavy, she asked Jonathan to step out of the room, and she covered her head with a sheet and sobbed.

What did you think of the premiere of Scenes From a Marriage? Grade the first episode in our poll, and drop your thoughts in the comments.