Anyone could be the killer, not just the four students who did detention with the victim, on Peacock’s new teen murder mystery One of Us Is Lying.

The streamer released the official trailer for the series Monday, which is based on Karen M. McManus’ bestselling book of the same name, as well as an Oct. 7 premiere date. The eight-episode season will span out over three weeks, with new episodes dropping on Thursdays.

Described as The Breakfast Club meets I Know What You Did Last Summer, One of Us Is Lying introduces viewers to the narrator/victim Simon (played by Wayne’s Mark McKenna). He’s the smirking Gen Z muckraker who kicks up gossipy dust on the first day of school and ultimately gets poisoned to death for it, as seen in the above trailer.

The Breakfast Club-esque culprits suspected of killing him, because they served time with him in detention, include the brain, Bronwyn (The Purge’s Marianly Tejada); the criminal, Nate (Unverified‘s Cooper van Grootel); the princess, Addy (Cobra Kai’s Annalisa Cochrane); and the jock, Cooper (American Housewife’s Chibuikem Uche). 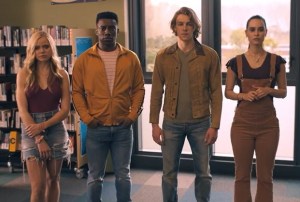 As the four point out in the trailer, everyone hated Simon. The trick is figuring out who also hated the four suspects enough to frame them.

Jessica McLeod (Debris) rounds out the cast as Simon’s best friend Janae, as does Barrett Carnahan (Cruel Summer) as Addy’s boyfriend Jake and Melissa Collazo (Swamp Thing) as Bronwyn’s younger sister Maeve. For the uninitiated, Maeve is at the center of the book’s sequel.

Actress Jennifer Morrison (Once Upon a Time, This Is Us) directed and produced the pilot, which was penned by Erica Saleh (Instinct, Evil). Darío Madrona (co-creator of Elite) serves as showrunner.

Are you excited about the premiere of One of Us Is Lying? Drop your thoughts in the comments.