The following contains all the spoilers from the sixth and final season of Netflix’s Lucifer.

Season 6 of the twice-resurrected Lucifer largely hinged on the arrival of the titular devil’s grown daughter, with Chloe, from the future. Played by Deadpool‘s Brianna Hildebrand, Rory came bearing a big ol’ chip on her angel wings, given that her father had been MIA for her entire life.

Rory thus brought with her a prophecy of sorts — that Lucifer (Tom Ellis) would disappear from Earth on a specific, imminent date. Surmising that only death could take Lucifer away from their child, he and Chloe (Lauren German) set out to proactively solve one last case, “the murder of Lucifer Morningstar.” But in the end, they realized that Lucifer needed to voluntarily exit Chloe’s life — if only for 60 or so years — so that he could realize his true destiny, not as God but as a ruler of Hell who doubles as therapist, helping the damned comes to terms with the guilt that landed them in the land down under. And upon Chloe’s death at an old age (where she was briefly played by Guiding Light‘s Jean Carol), she reunited in Heaven with Amenadiel, who then flew her down to be Lucifer’s “partner,” once again and forever.

TVLine spoke with showrunners Joe Henderson and Ildy Modrovich about how they turned what was supposed to be a one-act coda at the end of last season — back when Season 5 was going to be the “final” season — into a whole other 10 episodes, after Netflix surprised them with a Season 6 order. Plus, why the bittersweet Deckerstar twist in fact underscored the couple’s incredible love.

TVLINE | First, please speak as candidly as you can about how what was originally supposed to be just a Season 5 coda informed, and blossomed into, a 10-episode Season 6.
ILDY MODROVICH | It’s one of those things where in hindsight, once we had done Season 6, we realized, “Oh my gosh, if we had ended at Season 5 we would have missed the intimate kind of farewell that we got to tell in this final season.” Things like Dan’s (Kevin Alejandro) journey — in that final act of Season 5, he was going to go from Hell to Heaven, and instead we got to live in Purgatory with him for 10 episodes. We got to see him wrestle with that self-imposed guilt and try to figure out what was causing it, and that was a really satisfying and cathartic way to say goodbye to Dan.

You can go through each character and see the same kind of ups and downs of it. You had Ella (Aimee Garcia) finding out the truth, finally, but it wasn’t about “What?! There are celestials?,” because she’s our character of faith. Instead, we got to go through how that impacted her, which was, “Wait, my friends didn’t tell me?! How come they left me out?”

TVLINE | So in the original 5B coda, Ella never found out?
JOE HENDERSON | In the 5B coda, she found out in a completely different, fun way. In the 5B coda, we had set up that she was going to be watching Charlie, and when Amenadiel and Linda (DB Woodside and Rachael Harris) walk in, Ella’s like, “Hey guys, I don’t know how to tell you this….” — and she lifts Charlie up and his wings are out. They were like, “Ella, we can explain…,” and she is like, “No, actually I kind of get it.” We like the idea of a beginning as an ending, but it was so much more rewarding to explore to explore the heartbreak of being left out, and that sense of “Why wouldn’t anyone tell me?” Thank God we got to tell that story, and all these other stories. (Read Aimee Garcia’s take on Ella’s “perfect” moment.) 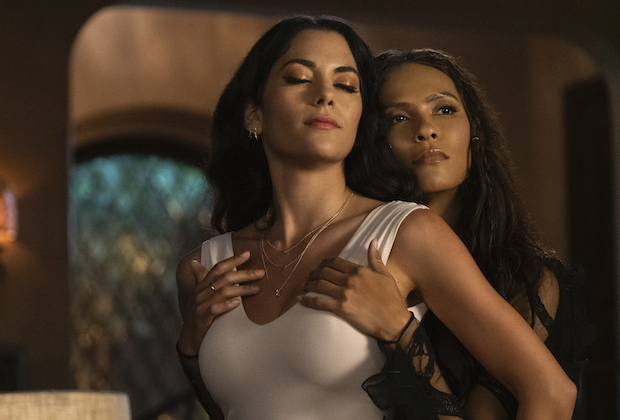 TVLINE | Would Maze and Eve (Lesley-Ann Brandt and Inbar Lavi) have ended up in Hell as they first planned, holding really sad dinner parties?
ILDY | [Laughs] They were going to ride off into the sunset on a motorcycle; that was their final beat in Season 5. What we got to do instead with Season 6 was go through the ups and downs of before a wedding, like, “Wait, do you love me for this reason or for that reason? Are you only into me because I’m going to be the Queen of Hell?” [But Eve says] “No, I like you no matter what you do!”

TVLINE | Similarly, were Lucifer and Chloe originally going to end up in Heaven, all happy and shiny? I can’t imagine the original coda had enough time to chronicle his about face.
JOE | No, it was all there! We dramatized Lucifer and Chloe, in particular, and a lot of other stuff as “scene-lettes.” We had Lucifer sort of processing the fact that as much as he wanted to be God, he wasn’t right to be God, that there was something he was better suited for. Amenadiel in turn realized that being God was actually what he wanted…. Another perfect example: We were able to dramatize what work Chloe needed to do on Earth and how important it was, and really feel that sense that she has unfinished business here and that that is not only OK, it’s beautiful, because this is a window of time [when she and Lucifer will be apart], but they will be together forever. 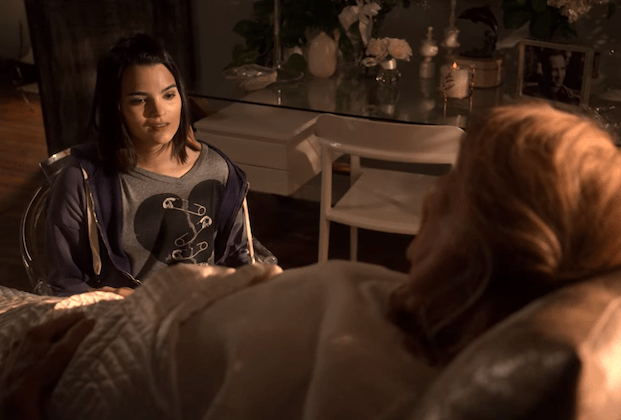 TVLINE | As far what you did do, I have to imagine that at least some “Deckerstar” fans will be saddened that Lucifer and Chloe ended up spending many decades apart. And the introduction of the Rory character very specifically dictated that outcome. Talk about your decision to commit to such a bittersweet set of circumstances.
ILDY | I think that it felt right, because it really felt like the proper final chapter of Lucifer’s whole journey. He started out as this selfish teenager, so to end up as the parent of a teenager who felt abandoned and hurt, and to suddenly be like, “Oh wait, I’m causing this?” And when they make the sacrifice together as parents, when Chloe and Lucifer decide, “This is what we have to do for our kid,” that’s love. The fact that both of them were making that sacrifice didn’t diminish their love for each other, and hopefully that’s what people will feel. It didn’t break their love or lessen it in any way, it only made it bigger and stronger to us. And in that final moment, when she knocks on the door in Hell, it’s bigger because of that time apart, weirdly. 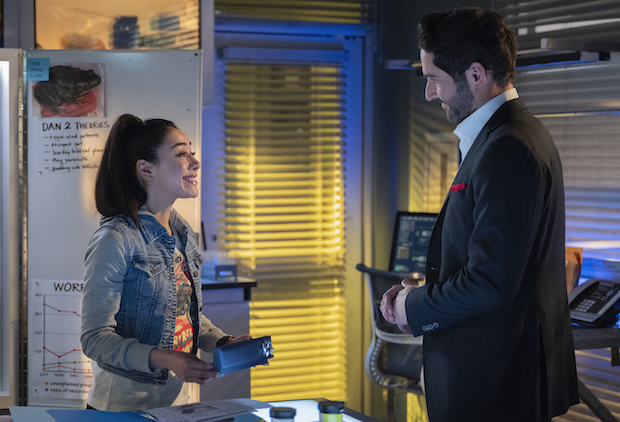 TVLINE | How long ago did you decide that Ella would eventually put together a murder board?
JOE | Once you realize Ella is going to find out the truth, the fun of it is: “Ella’s going to have a murder board.” [Laughs] And we do have a number of fun Easter eggs in there, including, “Dan is a centaur?” That’s an ongoing joke from the writers room, because in the original Lucifer comic there are centaur people on a different planet. Our ongoing joke is that when Mom built her other world, it’s all centaurs, which we reference a bit in Season 5. But in my canon, she has also Centaur Dan, who she rides around on. So when God goes to that world, I’m sure it got weird! [Laughs] But the fun of it is Ella’s the only character who ever figured it out on her own. We wanted to give her her own realization, and since she is our forensic scientist, it made sense for her to put the pieces together — which means one last, awesome murder board.

TVLINE | And Dan the Frog was the main catalyst for that?
JOE | Dan the Frog, yes, is the catalyst. 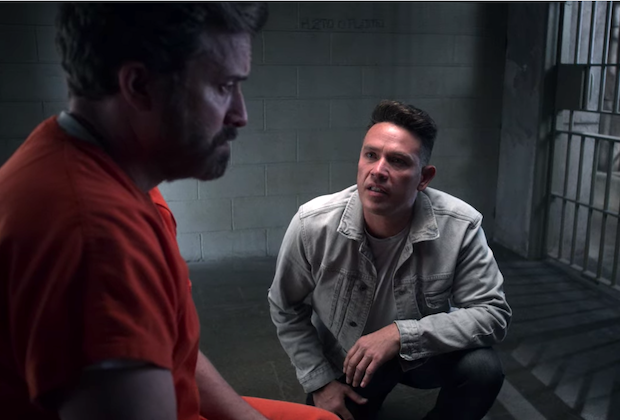 TVLINE | I was realizing that because Dan came back the way he did, he served to facilitate your final denouement, the fiery showdown with Le Mec (Rob Benedict). Which was the chicken, and which was the egg?
ILDY | It’s almost hard to remember, but I’m pretty sure that Dan was the first thing. We knew Dan was going to come back, and it was pretty late in us figuring out the season that we realized he was going to take over [Le Mec’s] body.
JOE | A big part of it was we knew we wanted to bring Le Mec back, because he was the person who killed Dan and Rob Benedict is amazing. Part of the puzzle became: We barely saw this guy last season, so how do we spend time with him and get to know him, so he’s a formidable villain? And how do we remind people of what he’s done? We had this Dan story, and Dan was going to have to confront him, so we started to combine the two. And at some moment we realized that the best way to remember who Le Mec is is to have him be Dan and explore that. Rob Benedict is a very funny actor, and his Dan impression is just amazing. By the way, Kevin [Alejandro] directed Rob playing Dan!

TVLINE | Le Mec was right there at the playground with Trixie (Scarlett Estevez). Would it have been too dark if she was the daughter he kidnapped?
JOE | Well, we had kidnapped Trixie before. But the truth of it is that [Rory’s abduction] worked backwards from one simple idea, which is: Rory had the mystery of “Why would my dad leave me?,” and we wanted her to confront the idea of “Maybe it was my fault?” That’s where that connection comes from. And [Lucifer disappearing] is because of her, so the arc is: My dad left me…. He must have had a reason…. What if I’m the reason?… Oh, I am the reason but it’s a good reason.

TVLINE | How did Linda’s book end up doing?
ILDY | Best seller, of course!
JOE | I have the hardcover and the paperback. 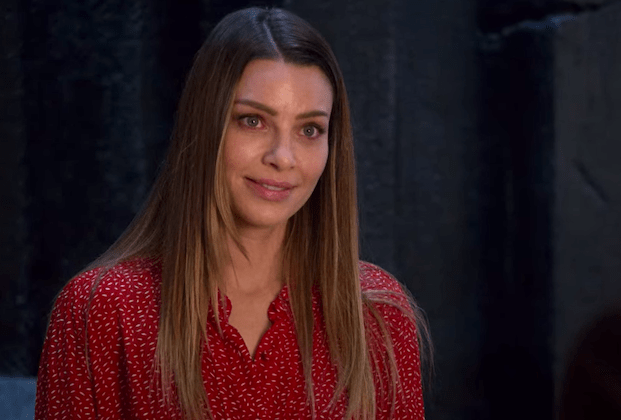 TVLINE | Lastly, for how long did you know what the show’s very last line would be?
ILDY | For a long time — ever since we came up with the idea that Lucifer was going to be a “therapist” to turn Hell into a “rehab center,” basically, and we knew that Chloe was going to join him in Hell — because that was essentially her Heaven…. The word “partner” was one they used throughout the whole season, and once they decided they were going to do this together…. You can say “I love you,” “I missed you,” whatever, but what felt right was they were solving crimes in Episode 1, and now they’re solving people’s guilt. Together.