Raq’s brothers have been beefing for weeks on Power Book III: Raising Kanan about everything from Lou-Lou’s outside interests in music to Marvin’s inability to keep track of his daughter Jukebox.

During Sunday’s installment, titled “The Cost of Business,” the two even took verbal swipes at each other about personal hygiene and being plugged into street scuttlebutt. But by the end of Episode 8, when Lou-Lou’s life hung in the balance after Nique’s crew firebombed his house, it was Marvin who came to his rescue and bravely carried him out of the fiery wreckage.

While fans won’t know until next week if Lou-Lou survived the attack, the drug-dealing brothers’ constant sniping juxtaposes perfectly with Marvin’s loving and inherent need to protect his sibling, according to actors Malcolm M. Mays and London Brown, who play Lou-Lou and Marvin, respectively. It was also the Starz drama’s most deadly and explosive episode thus far.

“Power Book III is different from anything else in the Power universe because it’s all about families,” Mays tells TVLine. “And that’s something I can relate to personally.”

For instance, Mays and Brown are still laughing about the sidewalk fist fight the characters had in Episode 5 that the police had to break up.

“It was such a brother fight,” Mays recalls with a chuckle. “Like no one wanted to hurt each other. We had to shoot the fight two times because the producers said it looked like a TV fight. That’s when I started egging London on and calling him Marvin so that we would stay in character. I kept saying, ‘You know what Marvin? Hit me. You know you want to hit me.’ London is such a nice guy. He didn’t want to hit me but it helped create the tension. We looked so ridiculous.” 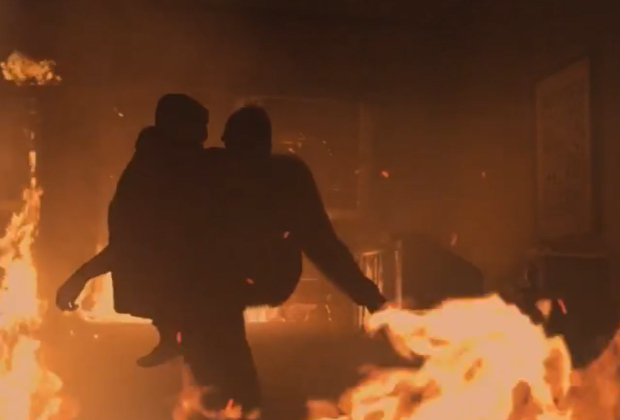 Although Marvin embraces violence (and driving straight at people while they shoot at him until he crashes), Brown prefers a more cerebral approach.

“I’m always in my head,” the Ballers vet shares. “I’ve always got lots of questions… Sometimes, when they say cut, the laughter will continue. Or they say cut and you gotta find the Kleenex and wipe your eyes and reboot, and get ready for the scene again. It just depends on the scene. But most of the time, we’re all just really trying to stay present.”

Carrying Lou-Lou out of the fire was both physically and emotionally taxing for Marvin and his portrayer, who was carrying with him the weight of Raq disowning Marvin and his complicated fraternal relationship.

“I didn’t try to totally escape [that] the minute they called cut,” Brown recalls. “If I need to be where I need to be, I’ll just kind of sit and stay there emotionally and mentally, but not necessarily in character. I played a lot of Nas’ ‘Illmatic’ to stay in that space and get ready.”

Brown also wanted to bring as much realism to the portrayal as he could.

“With all of his notorious acts, Marvin is still grounded,” Brown surmises. “He has issues that he hasn’t flushed out yet, and unfortunately, that clouds his decision making.”