The following contains spoilers from the final season of Netflix’s Lucifer… plus kinda-sorta spoilers about the “upcoming” TV series More Bones.

Toward the close of Lucifer‘s sixth and final season on Netflix, the titular devil (played by Tom Ellis) made up for lost time with his grown daughter Rory (Deadpool‘s Brianna Hildebrand), who was most unexpectedly visiting from the future.

Capping their fun-filled father/daughter day, Lucifer was poised to treat Rory to his favorite show, Bones — which he memorably binged (and got a bit crazy about) in Season 3 — only to be informed that a future reboot, titled More Bones, allegedly kicks the original’s ass.

You can view longtime Lucifer scribe Chris Rafferty’s script for the scene (featuring Rory’s enthusiastic recap of the More Bones premise) below. 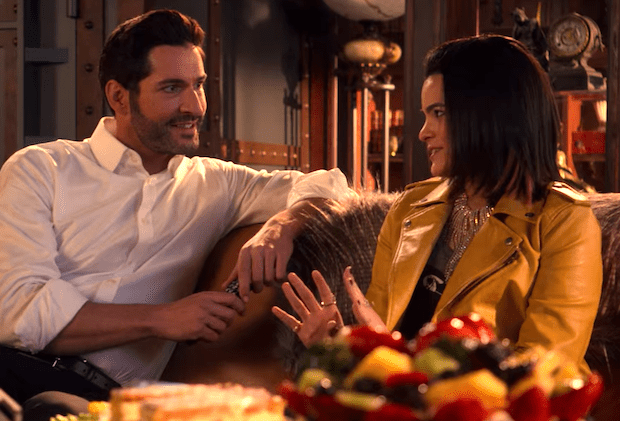 Asked about delivering such a final love letter to the former Fox procedural, co-showrunner Ildy Modrovich countered, “Why not have Bones love!” Co-showrunner Joe Henderson then explained to TVLine, “Part of what drove it is we fought so hard to get those Bones clips [for Episode 3×20]. It was the weirdest fight I’ve ever picked, where I was calling people up like, ‘I need Bones, I need Bones!’ They were like, ‘Why?,’ and I explained that ‘it’s an arbitrary joke but it’s amazing!’

“We fought so hard for it,” the EP continued, “that when we finally got it it felt like we earned it. And the idea that Lucifer loved Bones so much that he literally referred to Chloe as ‘Booth’ just lived through us. [For the final season] we were looking for callbacks, and the idea that Lucifer found this passion in his life, and his daughter carries it on, is weirdly beautiful.”

“Bones really lifted Lucifer up up at a very dark time in his life,” Modrovich added.

Henderson said that while Lucifer cleared previous Bones nods with creator Hart Hanson (who based the series on Kathy Reichs’ Temperance Brennan novels,) he did not tip off his peer to this latest one. “Hart was always like, ‘Don’t worry about it — and if you want to poke fun, I have tough skin,'” Henderson said. “But I was like, ‘No, we are not poking fun, this is love letter material, full stop. And he was like, ‘That’s cool, too.'”

At the Lucifer EPs’ insistence, TVLine reached out to Hanson and shared the script page below. Scroll down for the Bones creator’s reaction to the sequel. 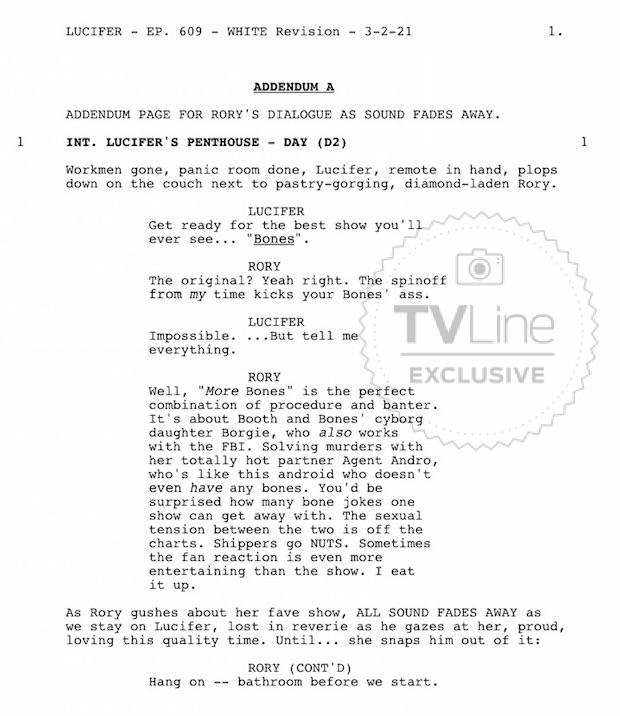 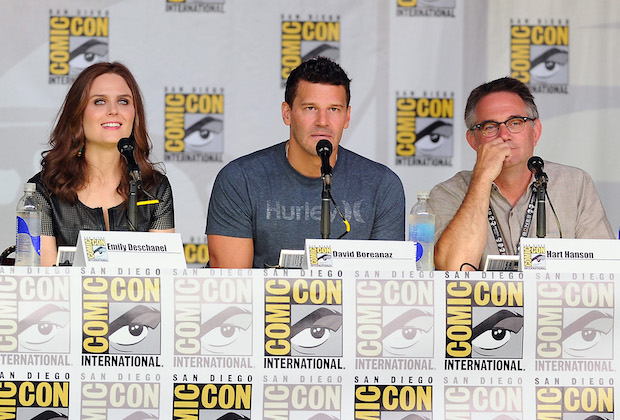 Presented with the More Bones scene above, Bones creator Hart Hanson told TVLine, “I believe in all things Lucifer. I believe they are amazing writers. But if More Bones from the future can come up with even ONE more bone joke or pun that we missed in 12 years, then all of us from the original Bones will provide the slow clap of respect and awe.

“There might be some rhyming pun around ‘knuckle’ that we missed,” Hanson allowed, “but I’m positive we exhausted everything around the rude-word bones like ‘coccyx’, ‘pubis’, and ‘pisiform’.”

Do you wish/hope that More Bones becomes an actual thing?