Warning: The Walking Dead sneak-peek video embedded in this article may be upsetting to some viewers; it certainly was to us, anyway.

In the opening moments of Sunday’s episode of AMC’s The Walking Dead (9/8c), we’re taken back to the sneak attack by the merciless Reapers that ended “Acheron, Part II.” (RIP, Roy.) This time, however, we follow Daryl and his faithful companion, Dog, as they try to elude their masked pursuers.

As you’ll see in the exclusive preview above, it’s all going pretty well for the dynamic duo — up to a point. Then suddenly, Daryl and a Reaper are engaged in brutal hand-to-hand combat, Dog leaps into action to prove that he’s man’s best friend, and… ack!

“No!” cries Daryl. “No!” And those of you who are Dog fans will likely do so right along with Daryl when you see what happens. 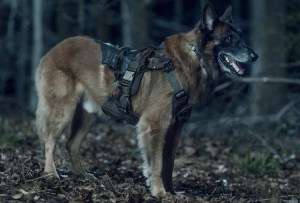 Thus far, the Reapers have remained largely a question mark. All we really know is that they ran roughshod over Maggie’s last group and seem hellbent on continuing to do so. “There is intentionally a bit of a mystique around [them],” acknowledges showrunner Angela Kang, “because I think that’s part of the ethos of this group. They operate in shadowy ways.

“As a group, they clearly have some background in militaristic fighting techniques,” she added. But they don’t regard themselves as the antagonists that Maggie and we do. “Like many of our villains,” notes Kang, “I don’t necessarily think that the Reapers see themselves as the bad guys.”

To watch the clip — if you dare — press PLAY on the video above. Then hit the comments. That can’t be the end of Dog — gulp — can it?