Season 7 of AMC’s Fear the Walking Dead is setting the stage for a classic battle between good and evil — in other words, an epic clash between friends-turned-enemies Morgan and Strand. In the trailer released Thursday, Victor says, “I’m done listening to you, Morgan — everyone is. Everyone tried it your way, and look what happened.

“Face the truth,” he continues, his voice rich with contempt. “You failed… and now it’s my turn… I’m going to do what you couldn’t… I’m going to rebuild the world [and] help everyone you let down, all while you watch from the outside.”

Which sounds both mean and altruistic at the same time. Noting just that, Morgan retorts that if Strand lives up to his potential as a Big Bad — and don’t we all know that he will? — “I will come for you, Victor, and I will do what you tried to do to me on that submarine, only I won’t miss.”

The former allies can’t even get along in Season 7’s dramatic key art, which you can view in full by clicking on the image below. 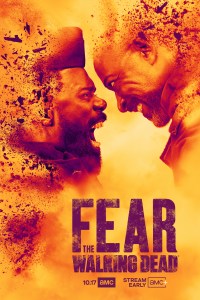 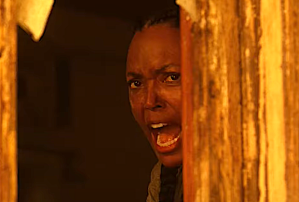 In other Fear-ful news, AMC announced that Criminal Minds alum Aisha Tyler, who directed Season 6’s “J.D.,” is joining the cast in an as-yet-undisclosed role. But judging from the glimpse of her that we see in the trailer, the character means business.

As you count down to the Walking Dead spinoff’s return on Sunday, Oct. 17, at 9/8c, you can check out the sneak preview by pressing PLAY on the video above. Then hit the comments with your reaction. Ours? What was up with the lack of Alicia? (At least she got a shout-out.)