Spoiler alert: We’re about to break down the premiere of Doogie Kamealoha, M.D., now available to stream on Disney+.

If you tuned into the premiere of Doogie Kamealoha, M.D. simply to find out how the Disney+ reboot is connected to Doogie Howser, M.D., may we offer you an Advil? Because surely your mind is blown.

The “connection” is revealed early in Episode 1, after a patient expresses some concern over being treated by 16-year-old Dr. Lahela “Doogie” Kamealoha (played by Andi Mack‘s Peyton Elizabeth Lee).

“Remember Doogie Howser, that show from the ’90s?” Dr. Lee (Young Rock‘s Ronny Chieng) asks the patient. “She’s like a real-life Doogie Howser! That’s why we call her Doogie.”

There’s meta, and then there’s this — an unexpected explanation that even takes one of Lahela’s fellow doctors by surprise. “I never made that connection,” admits Dr. Nakayama (Mapuana Makia), to which Dr. Zeller (UnREAL‘s Jeffrey Bowyer-Chapman) replies, “Girl, why did you think we called her Doogie?”

And that nickname isn’t the only similarity Lahela shares with Neil Patrick Harris’ iconic character. They both have a passion for logging their personal life lessons, though Lahela’s vlog is certainly more high-tech than Doogie’s white-text-on-a-blue-screen journal. (Sometimes when I close my eyes late at night… I can still hear the typing.) 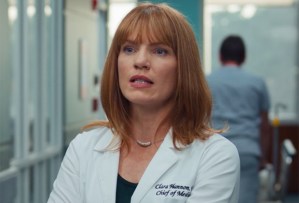 Another similarity: Lahela’s age and profession are constantly at odds, a problem exacerbated by the fact that her helicopter mother (Kathleen Rose Perkins, doing her best impression of Bryce Dallas Howard in Jurassic World) is also her boss at the hospital. This leads to Lahela and her mom butting heads over everything from heart transplants to extended curfews, triggering this sassy line of dialogue that perfectly encapsulates the duo’s uncomfortable dynamic: “So now you’re my mother? A second ago, you were my boss. Which one is it? Because you don’t get to control my entire life!”

Of course, Lahela’s utter lack of work-life balance occasionally works to her benefit, like when her mother is there to console her after losing her first patient (special guest star Barry Bostwick). Meanwhile, Lahela’s dad (Jason Scott Lee) is too busy being hot and making shaved ice to get too caught up in their drama.

Speaking of hotties, Episode 1 also introduces us to Lahela’s main squeeze Walter (Alex Aiono), a smiley surfer who’s surprisingly chill about his date having to ditch him in the middle of a big school dance because of an emergency at the hospital. He’s actually a breath of fresh air compared to most TV crushes, whose maturity and attention spans are so thin, they’d be on to the next girl before the night was over. And that first kiss! Swoon.

Did you enjoy your first consultation with Doogie Kamealoha, M.D.? Weigh in via our polls below, then drop a comment with your full review of the premiere.