“God helps those who help themselves.” That’s what a conniving Kristen DiMera said to no one in particular as she disrobed from her fake nun habit and admired the diamond and sapphire necklace she had stolen on Wednesday’s installment of Days of Our Lives: Beyond Salem.

Why Anna (played by Leann Hunley) would leave such an expensive piece of jewelry unattended in a room with a strange nun she had just met is beyond us. But that’s what Anna did as she ran to get her checkbook to donate to Sister Mary Moira’s fund for orphans. After the “nun” guilted her into adding yet another zero to the check, no less. Anna didn’t even notice it was gone until Marlena (Deidre Hall) and John (Drake Hogestyn) came over to retrieve the necklace on behalf of the ISA but couldn’t.

John then asked Anna who this nun was, and he and Marlena realized Kristen had struck again. 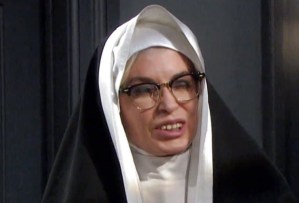 “Beyond Salem is a really cool concept, and honestly, I love the characters that I helped create on Days,” Eileen Davidson, who reprised her role as Kristen, cheerfully tells TVLine. “It’s really fun for me to come back and revisit them, you know? They’re like your children, and I didn’t want to say goodbye to them forever and ever. It’s really fun for me to do this as a hit-and-run.”

Davidson, who is also known for her work as Ashley Abbott on CBS’ The Young and the Restless and her reality show turn on The Real Housewives of Beverly Hills, says the best part of coming back for the Days limited series spinoff was working with her bestie Lisa Rinna. Their characters, Kristen and Billie, will have a showdown on Thursday’s Episode 4, Davidson divulges.

“Kristen is up to her old tricks, and she’s as devious as ever,” Davidson adds. “I had a lot of fun working with Lisa, and we were able to revisit our friendship off screen and have some fun on screen, too. There’s even a Real Housewives wink-wink in Episode 4 for the audience. Lisa and I had such a blast, and we decided it wasn’t long enough. We wanted to do more.” 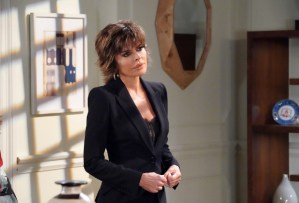 If there is a Days of Our Lives: Beyond Salem sequel, Davidson says she would return.

“It was such a great time,” she continues. “I would do it again in a second. I also like that they’re bringing it to a different platform and reinventing the wheel. That’s awesome. It’s a great idea, and I love being a part of something that’s different. You can’t really say that so much nowadays. Hats off to them for coming up with this concept and combining old Days with new Days and beyond that. Excuse the pun.”

Young and the Restless fans will be happy to know that Davidson’s Ashley will be back on the soap in the near future as well, she says.

“Ashley and Kristen are just so completely different,” Davidson concludes. “As an actor, it’s a treat for me to play a pragmatic and smart character like Ashley and someone who is off-the-hook nuts like Kristen. It’s great. With villains, anything goes, and you get to be more creative.”

Are you enjoying Beyond Salem so far, Days fans? Drop your thoughts in a comment below.