This week on DC’s Stargirl, Eclipso made his presence known, while Cindy’s recruitment plan hit one (temporary?) snag.

The cold open for this Tuesday’s episode flashed back to 10 years ago in Farmersville, Calif., where a young Cindy woke from a nightmare about her father finding her and wanting to “change” her. Cindy’s mom rushed in and assured her that they will never be found — though once Cindy went back to sleep, we saw Dragon King emerge from the bedroom shadows and, judging by the off-camera scream, startle his found child.

Back in present day Blue Valley…. 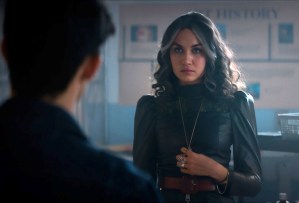 Cindy eyeballed Injustice Unlimited recruit Cameron while standing across the street from his mural-in-progress, though Grandma Mahkent warned Dragon King’s offspring to steer clear of her kin — and punctuated her chilling words with a puff of icy breath! Not one to be easily deterred, Cindy later approached Cameron in the high school art room, attempting to bond over dead parents and all. Cameron, though, recalled how ice-cold Cindy had been about her own mother’s years-ago death, and said he wasn’t buying what she was selling. Cindy was poised to go Shiv on Cameron, when Mr. Deisinger interrupted their face-off. At episode’s end, Cindy in the ISA HQ gave Artemis and Isaac a cursory overview of the “power” that the Black Diamond brings their start-up supervillain squad. And while not enlisting Cameron is a bummer, she made clear that she is more intent on adding Mike Dugan to their ranks. But how?? 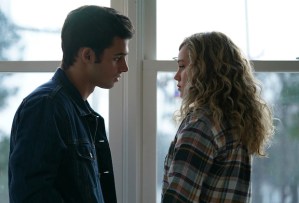 A waiting Pat busted Courtney when she returned from her post-curfew hunt for The Shade. When she explained that she was thinking to recruit him to the good guys’ side, Pat warned that The Shade is not to be toyed with. The next day, Richard Swift paid Baraba a visit, to reveal that he knows Courtney is looking for him, and strongly suggest that Barbara counsel her daughter otherwise. Luckily, Courtney got distracted by the prospect of reaching out to Cameron, who we and then she realized draws portraits of her in his notepad. Stopping by the Mahkent manse, the two bonded over that, and Cam’s plans for the future, and they were thisclose to a first kiss when Yolanda frantically texted Court again and again about bad, Eclipso-caused weather. When Courtney excused herself, Cameron groused that she has left him hanging before — but she assured him that won’t happen again.

Court suited up and met up with the others at the high school, which seemed to be the eye of the new Eclipso storm. Noticing that Mr. Deisinger’s car was parked outside after hours, they went inside to make sure he was OK. Little did they know that earlier in the day, after being taunted by a Black Diamond-toting Cindy, Mr. Deisinger found Eclipso’s voice in his head, claiming to be the art teacher’s new “muse.” The JSA thus found the art room splattered with all kinds of paint, and easels festooned with dark, diamond-shaped designs. When Courtney saw that one wall was covered with a large, ominous diamond design, (Eclipso’s?) head began to protrude out of the flat surface, Freddy Kruger-style. Eclipso then entered each of the kids’ heads, making Yolanda see Brainwave, Rick see Grundy, and Beth see… well, her possibly divorcing parents.

The painted wall then seemed to come to life, and slither across the ceiling and down the hall. Courtney ran to find Mr. Deisinger consumed by the evil goo’s dark tendrils. She reached out to him with the Cosmic Staff and urged him to see and reach for “the light,” and when he did so, Eclipso’s essence left him and snaked away down the hall. We later learned that Deisinger was put on a psychiatric hold after the madness, and told that Courtney found him while looking for a lost something or another. Realizing that Deisinger was not in actual possession of the Black Diamond, Pat observed that Eclipso’s powers must be getting stronger.

Speaking of powers: Cameron was last seen on the ladder, working on the mural, when a sudden, painful sensation caused him to drop his brush. And when the brush landed on the pavement, we saw that it was covered in frost….

What did you think of “Summer School: Chapter Five”? And what part of Eclipso and/or the OG JSA’s past do you think Pat and Barb have still not shared with Courtney?