Riverdale fans have complained for years that Ashleigh Murray’s character Josie needed more screen time, and apparently, the Riverdale writers heard them… and so did Murray.

Murray was a series regular when the CW teen soap debuted in 2017, but Josie was often sidelined in favor of other cast members, and Murray exited the series after Season 3 to play Josie on spinoff Katy Keene — which was then cancelled after just one season. Murray thought she was saying goodbye to the role for good: “After we did Katy Keene, and it unfortunately didn’t go for a second season, I just figured that that was it for Josie,” she tells TVLine.

But Josie comes back to Riverdale this Wednesday (8/7c) — and she and the town are a lot different. After the time jump, Josie is now a global pop superstar in the middle of a world tour who makes a quick stop in her old hometown. “She’s pretty much at the top of her career,” Murray teases. “All of her dreams have been realized. She is living them through and through. She is doing world tours, she’s number one on all of the top music charts. She is the Josie she always saw herself to be.” It’s a musical episode as well, so fans will get to hear Murray sing songs by Celine Dion and Nina Simone. 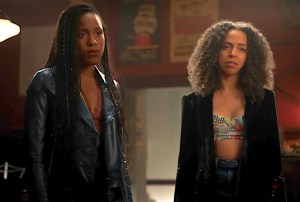 We’ll also see the return of Josie’s former Pussycat bandmates Melody (Asha Bromfield) and Valerie (Hayley Law), whom we haven’t heard from at all since Season 2. They don’t exactly welcome Josie back to town with open arms, either. The relationship between them and Josie is “strained,” Murray reveals, “because they haven’t really been in contact for all that time. So you can imagine letting a text message go for eight years… it’s probably going to be a little awkward when you text them back.”

Speaking of “awkward,” the episode directly addresses Josie’s lack of screen time during an uncomfortable conversation between her and the rest of the Riverdale gang. “There’s a lot of reckoning that’s happening all around in this episode,” Murray notes, with Josie finally speaking up and voicing the concerns that she — and fans — have had for years. “It definitely is giving the viewers a chance to feel like they themselves are also being heard in wondering why this character has been invisible for so long.”

Murray says she didn’t speak directly with showrunner Roberto Aguirre-Sacasa or the writers this time about the issues with Josie’s character, but “it’s been a topic of conversation for years. It’s nothing new.” However, “the fact that it’s being talked about through the character is new,” she adds. And even though it’s impossible to make up for three seasons of neglect in a single episode, this week’s installment at least gives Josie the kind of showcase she’s always deserved. “It definitely is a space where Josie is regaining her own agency and her own power that she has never had in Riverdale,” Murray hints.

For now, Josie’s return to Riverdale is a one-shot deal, and Murray doesn’t have any plans to return to the series at this point. But if this is her final encore as Josie McCoy, it’s certainly a high note for Josie to go out on, Murray says: “It’s a wonderfully done episode, and you see a full arc of who Josie was, is, and will continue to become.”

Looking forward to Josie’s return, Riverdale fans? Drop your thoughts in a comment below.