In a just world, Nova could petition to defund the police while also relying on said officers to help keep the peace at a vaccination drive that got out of hand. But if Queen Sugar has taught us anything, it’s that justice is subjective and being Black in America is complicated.

When the beloved drama roared back for Season 6 on Tuesday, Nova dealt with those complications on various levels. First, she secretly met with a Black officer for an article about the New Orleans Police Department brutalizing and over-policing Black residents. The cop, who didn’t want to be identified in her story, said Calvin and his crew were bad, but what was still going on within the force on a daily basis is worse.

Nova held a vaccination drive days later to help the elderly and underserved Black people in her parish, and she even picked up Prosper to ensure that he would get vaccinated — and Prosper couldn’t thank her enough. “When this first happened,” Prosper said of the pandemic, “the world was saying, ‘If you’re old, Black and poor, your life ain’t worth saving.'” Touched by his words, Nova said that the vaccination drive was proof that his life and the lives of others like him not only mattered, but would take precedence at the event.

Too bad Nova and Prosper’s white neighbors from a nearby parish didn’t get that memo and showed up in droves to try and get the vaccine after their clinics and community centers ran out. In an attempt to separate residents from the riffraff, Nova established a rule that everyone in line would have to have a reservation and show proof that they lived in St. Joseph parish.

Most of the people in the line followed the rules until one white guy, along with his wife and son, claimed to need the shot because the wife worked in healthcare. The family was likely lying because they couldn’t prove it, and the man angrily sped away. He later snuck in a tent and stole a few vials of the vaccine. (How will he even know how to administer it?!) 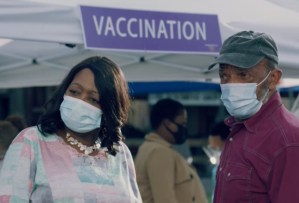 Horrified by some people’s utter lack of decorum and grace, Nova did the very thing she thought she never would: She called the police. The sheriff showed up and immediately began harassing Nova and calling her a troublemaker and a big mouth for attempting to defund the police. He also made an elderly Black woman go home and get her ID to eliminate the appearance of bias when a white women, who didn’t live in the parish, cried “reverse racism.” Aunt Vi kindly took the older woman home to speed up the process.

Sadly, the worst was yet to come. Another Karen accused Prosper of allowing a Black woman to cut in line, but the Black woman said she briefly got out of line to go to the restroom. Prosper asked the white woman if she lived in St. Joseph, and a young white cop came over, grabbed his arm and said Prosper needed to lower his voice. When Prosper resisted, the officer grabbed him again and knocked him to the concrete where he bumped his head. Sigh. Maybe Nova shouldn’t have called the police after all.

Elsewhere in the episode, Ralph Angel abused payday loans while trying to sue the government on behalf of Black farmers; Aunt Vi delivered mystery bags to mystery people, and she and Ralph Angel were still beefing; Charley snuck around with Davis in Los Angeles; and Micah indulged in inappropriate trysts with his older professor.

What did you think of the Queen Sugar Season 6 opener, and which storyline drew you in the most? Grade the premiere in our poll, and drop your thoughts in the comments.