New Amsterdam‘s “will they/won’t they/they finally are!” pair are getting super cozy in their favorite rooftop spot in TVLine’s exclusive photo from the Season 4 premiere.

Coming off the Season 3 finale, in which Max finally removed his wedding ring and kissed Helen, the docs can be seen passionately embracing, their faces hovering just inches from each other, in the below image. But is everything between them as seemingly perfect as it appears to be?

“They skipped over so much when they got to that door. They didn’t say anything on that long walk to [her] door together,” showrunner David Schulner notes. “There are so many things that they have left unsaid. And I can guarantee you the first thing they do when they close that door, they don’t have a conversation. So there’s a lot to unpack.”

“The audience knows more about them than they know about each other, in terms of what Sharpe was doing in London,” Schulner adds. “Max doesn’t really know any of that, about Mina, about her mom, about the clinic that she saw that she used to work at. There’s so much that they need to talk about before they can move on with each other.”

Schulner also previously told TVLine that Season 4 — which touts the tagline “Love heals” in its poster — will embrace “the joy of reclaiming our lives [and] chasing happiness wherever we can find it” following a pandemic-filled third season. The upcoming episodes are “about the people we love and holding them close and never wanting to let them go — and potentially running after them.”

New Amsterdam Season 4 premieres Tuesday, Sept. 21 at 10/9c on NBC. Until then, check out the full first look below, then hit the comments with your thoughts! 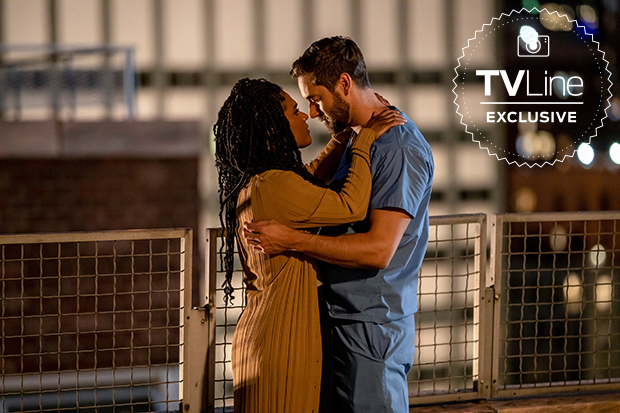