Sunday’s Animal Kingdom marked not one, not two but three turning points (whether the show winds up turning back from them again). First, J extended his as well as his uncles’ relationship with Lark. Second, Pope made strides to erase Smurf from his home (as a precursor to dulling her impact on his head?). And third, Craig and Renn reached a critical crossroads in the mom-and-pop operation that, let’s be real, we all assumed was doomed from the start. Read on, and we’ll go over all the deets… 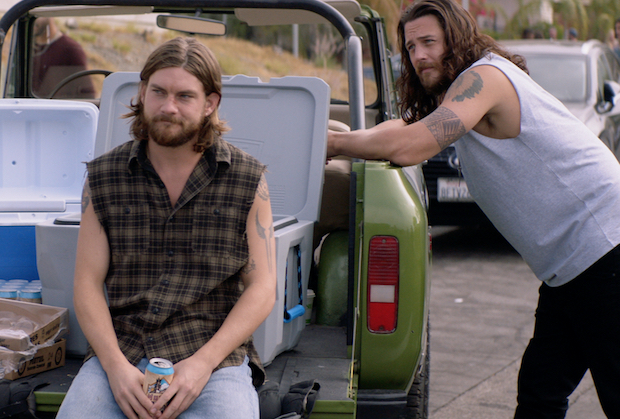 ‘CAN YOU MAKE PIE?’ | In our ’80s flashbacks, we met not only Baz’s mother Linda, a dancer at a strip club Janine’s gang intended to hit, but a baby-faced Pete, whose father Big Pete had Manny pummeled for nonpayment of gambling debts. When the future Smurf stalked up to Big Pete’s garage and forked over what Manny owed, the baddie was so impressed by her cojones that he practically quoted Casablanca (“I think this is the beginning of a beautiful friendship”). Later, Janine assured Manny that he’d repay her down the line. But “you don’t have to thank me, baby,” she purred, adopting the sweet talk that Ellen Barkin’s version of the character used so frequently. In the present, the cop to whom I wish the show would give a name made an appointment with J to look over the police files on the Codys, and Craig discovered just how bad business was at The Drop. It wasn’t likely to get any better that evening, either, not with Carlos serving his carnitas down the block at Son of a Beach.

Taking matters into his own hands, Craig approached Carlos and poached him to sling hash at The Drop instead. But Nick’s dad got more than he bargained for, too — no good deed going unpunished and all — when the chef inadvertently revealed that Renn was still dealing. Back at Cody HQ, Pope busied himself redecorating, chucking everything that Smurf had ever picked out for his room and replacing it with… Is that Pier 1? Anyway, replacing it. He did a fine job, too. If being a criminal mastermind doesn’t work out for him, he could rebrand himself as an unusually grunty interior designer. Mind you, Mommie Dearest still was hardly exorcised from his mind; right into the drawer went a photo of the younger version of himself and Julia with Smurf back when she was just Janine. 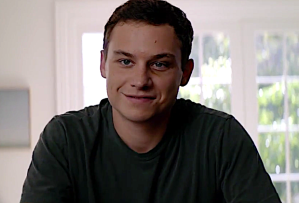 ‘GET A REAL JOB LIKE REAL PEOPLE’ | Once the Codys got a gander at the police files on them — including a noteworthy mention of Craig’s dad, Jake — they decided that yeah, OK, maybe they should buy a cop. When J and Deran lowballed Officer Name-TBD, he insisted that he was worth more — and proved it by revealing that the DEA knew someone was aiding and abetting Adrian. “I’ll take care of it,” Deran told J. Mm-hmm, because that worked out so great last time. At least Deran did know who had to be sending his ex funds: Adrian’s sister, Jess. Once he got over her “brilliant” system for discreetly wiring money through “the guy over at the liquor store on Ditmar,” he warned her to lay off. And yes, it was a threat, “not from me,” he added, “the DEA.” Off Carlos’ revelation about Renn, Craig ransacked their place and found her stash of loot hidden in a tampon box. So when she came home with Nick, he was just itching for a fight.

Though Renn pointed out that Craig had always known who she was, he shot back that “I didn’t know you’d also be a s—ty mother.” One slap and a forbidden mention of what a crap parent Smurf had been later, and their stab at coparenting had gone the way of one of Nick’s diapers. Meanwhile, Pope stalked Officer Name-TBD to a Mexican restaurant, where he ascertained as best he could that the cop really did want to be on the take. Elsewhere, J dropped a retainer on Lark for “future services” and asked for a referral to a criminal attorney, one with federal experience. Hadn’t he just been about to cut bait and run on his family? Things had changed, he said. Now they needed someone smart enough to “help us when we need to be creative” with the bookkeeping. Before they struck a deal, Lark had one more question: “Do you ever smile?” The hilarious result is pictured above. (Very Wednesday Addams in Addams Family Values, no?) 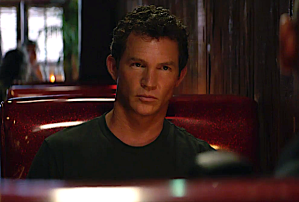 ‘IT’S ALL MY FAULT’ | As “Let It Ride” rounded the bend and headed for the finish line, Pope passed on coming to Deran’s bar to… sleep? Nah, not really. He wanted to go back to the skate park he’d frequented as a kid and just skate back and forth, back and forth like he used to. Which was kinda sweet… and sad… really, in equal measure. Predictably, Parker showed up at Deran’s bar pissed that The Drop had, as he put it, “stole[n] my food-vendor guy.” That Deran was losing their battle was to be expected, though. He was a loser — that’s why he hadn’t gone pro. Hence, all the broken boards decorating the joint were a metaphor. And it was something in the way that Parker said it; it was so obnoxious that suddenly, Craig’s fist was flying at his face. Then a full-on fracas went down between Deran and Craig and Parker and his henchmen. Needless to say, the Codys came out on top. After delivering the final blow, Deran even got in a great zinger: “How ya like that metaphor, bitch?”

So, guess I was wrong, huh, about Parker being a possible love interest for Deran? Clearly, J and Lark are going to hook up, no? But how foolish is he to expose the Codys’ shenanigans to Pam’s granddaughter? And do you think Craig and Renn are really done-done? Hit the comments.