The Professor has come up with brilliant ideas to get out of tight jams for four seasons on the Spanish crime drama Money Heist. But when Netflix’s wildly popular series (also known as La Casa
de Papel) roared back Friday with the first half of its highly anticipated Season 5, everyone’s favorite mastermind seemed at a loss.

If his momentary confusion is to be believed, the Professor never anticipated disgraced inspector Alicia Sierra to get the jump on him. He also never thought the merciless pregnant woman would chain him up, torture him and shoot him in the left foot — but she did. Sierra even had the Professor radio his crew, who have been holed up in the Bank of Spain for 100-plus hours, to apologize and basically say goodbye. 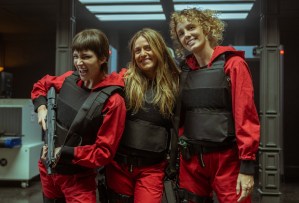 The defeat certainly felt palpable and plausible enough — but this is the Professor we’re talking about here. The same man who, at the end of Season 4, figured out a way to not only help his boo thang Lisbon escape police custody, but managed to drop her off at the Bank of Spain so she could join the other Dali-mask wearing wildlings in their squad.

Even before the Professor said he didn’t have a Plan B and Lisbon confirmed it, members of the crew had started to crack under the pressure. For starters, they’re all still mourning poor Nairobi. Plus, Bogota told Palermo that melting down less gold and extracting it prematurely felt like a great way to get killed or caught.

And now that Manila has outed herself as a robber pretending to be a hostage, Stockholm is losing her cool because Manila was supposed to be her and Denver’s Plan B for Cincinnati’s parental guardianship in case the couple doesn’t make it out alive. But that’s a wrap now. 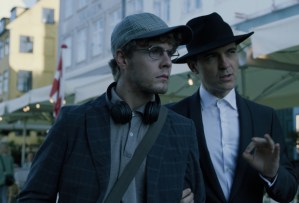 Speaking of Plan Bs, that flashback involving Berlin and his estranged son Rafael gave the impression that the Professor’s nephew might just be his backup plan. After all, dude is an MIT grad who majored in electrical engineering and cybersecurity. He’s not going to leave his uncle hanging, right?

Despite the episode’s bleak ending and the possibility that the “Bella Ciao” bandits are doomed, there were bright spots in the Season 5 opener. Chief among them was the way Marseille escaped that military helicopter without getting arrested.

The lamb “farmers” who helped out were an especially impressive touch. That said, you gotta feel a little sorry for the poor man who had to drive that red Volvo against his will to help them escape. For reals, isn’t it bad enough the gang kidnapped this man’s wife from the beauty salon? Come on, guys. Have a heart.

Heart is all our favorite robbers have left at this point but with any luck and a possible and much-needed assist from Rafael, things have got to get better. And the Professor has to get away from Sierra.

What did you think of the Season 5 premiere of Money Heist and are you worried? Grade the installment in our poll and drop your thoughts in the comments.