Guillermo’s newfound status as a kickass vampire slayer is a major sore spot for the Staten Island vamps as FX’s What We Do in the Shadows emerges from its coffin for Season 3.

Thursday’s two-part premiere finds Nandor and his bloodsucker roommates still reeling at the news that Guillermo is a slayer — and also saved them from certain death at the hands of the Vampiric Council. (“Still, he should not have done that much slaughtering,” Nandor notes.) They’re holding Guillermo captive in a cage in their downstairs crypt, afraid to even get near him: They just toss him raw chicken from a distance. Nadja wants to kill him, but Nandor argues that he saved their lives, so they’re at a stalemate. Guillermo doesn’t mind, though: He can actually escape through a hole in the cage and keep the house functioning while they’re asleep. Plus, he’s had time to rewatch Gilmore Girls! 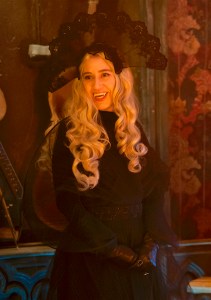 The vampires get a visit from The Guide, played by returning guest star Kristen Schaal, who brings a message from the Vampiric Council. (She just needs a VCR to play it on.) In the video message, Viago congratulates them on killing “almost 70 percent of the most powerful vampires in the tri-state area.” Guillermo’s kill spree has left him no choice: He’s making Nandor and company the leaders of the local Vampiric Council! They’re all honored, except for Laszlo, who couldn’t care less: “I became a vampire to suck blood, and to f–k forever.”

Guillermo is summoned by the vampires, who inform him they’ve made a decision: They’re not going to kill him… for now, anyway. In fact, they’re making him a full-fledged team member — not a vampire, of course, but a bodyguard. They also put him under a four-way hypnosis to make sure he doesn’t hurt them, and Colin can’t resist tacking on a bit where Guillermo has to meow whenever Colin says his name. (Hypnosis doesn’t actually work on Guillermo anymore, but he politely plays along anyway.) He joins them as they journey to the Vampiric Council headquarters, where The Guide unveils for them the Master’s Throne. Only one of them can sit on it, though… and Nandor, Nadja and Colin all wrestle to take the coveted seat. 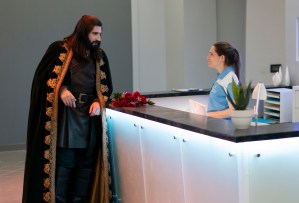 In the premiere’s second episode, Nandor and Nadja agree to share the Vampiric Council throne and pay a visit to a rebellious group of young vampires who refuse to pay their dues. (After some spirited debate, Nadja settles it by ripping a young guy’s heart out — which is certainly convincing.) Meanwhile, Nandor wants to romance a girl who works at his gym, so he sends in the smooth-talking Laszlo, who takes the form of Nandor using the “Cloak of Duplication.” First, though, Colin takes a shot at it and strikes out with his “negging” approach, and Laszlo also fails in his attempt to “pitch woo.” Guillermo has better luck and gets the girl to agree to go out for coffee… but based on their conversation, she just thinks Nandor is in love with Guillermo. Plus, she’s into girls anyway. But should we be worried about The Sire, the oldest living vampire that seemed to be breaking loose from captivity as the episode ended?

Give the Shadows premiere a grade in our poll, and then head down to the daaaark and scaaaary comments to share your thoughts.