At the start of Season 4, grown-ish‘s Zoey and Aaron were so smitten and drunk in love, they eloped in Mexico. Fast-forward to the midseason mark, and the two were barely speaking, as fans saw in Thursday’s installment, titled “You Beat Me to the Punch.”

The Season 4A closer opened with Zoey going to meet Aaron after he taught his midnight class and greeting him with a conciliatory kiss. They had previously fought because Aaron nearly came to blows with Luca for outing Zoey’s boss as a design thief, which basically got her fired from her internship. But as Zoey explained, she’s a grown-ass woman who doesn’t need Luca or Aaron to speak on her behalf.

After basking in the glow of her “makeup smash” with Aaron the following morning, Zoey wasted no time jumping on her computer to search for the accredited internship she needs in order to graduate. Unlucky in her quest, Zoey tried to lighten the mood by encouraging Aaron to meet up with her after his class so they could drink and party the night away at Luca and Doug’s luau. Aaron, who still isn’t a Luca fan, begrudgingly agreed, and the lovebirds snuggled up until it was time to start their day. 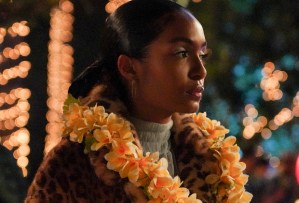 Hunting down an internship proved fruitless, and the need for drunken revelry increased as Zoey attempted to take her mind off her worries. Zoey, along with Jazz, Ana, Nomi and Vivek, pre-gamed by downing shots of tequila and discussing their hopes and dreams for that night and beyond. Ana and Nomi were still trying to recover from their grueling LSATs, and Jazz was still deciding if it was time to move on with Dez or if he was all wrong for her because of his gender fluidity.

As Zoey and the crew prepared to get their party on, Aaron was meeting with Charlie, who is now the dean of students, to try and persuade him to give Zoey a pass on a required internship credit. Because, as he reasoned, two incomplete internships could technically equal one. Over at the party, Zoey and Luca made amends, and Luca offered Zoey a job at his fledgling fashion line, a gig that could technically count as an internship.

Aaron walked into the party and instantly felt threatened when he saw Luca and Zoey laughing and chatting. Zoey ran to Aaron to explain that Luca had offered her a job, but Aaron didn’t want her to take it. A disappointed Zoey then informed Aaron that it was too late. She had already accepted the job. A visibly annoyed Aaron grew angrier when Luca snidely complimented his sweater, and he punched him in the face. Luca didn’t fight back, so Aaron left, but before he did, he gave Zoey the stanky-est of stank eyes. 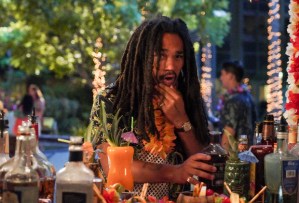 Kiki, who had been sneaking around with Doug outside of Luca’s overprotective purview, consoled Luca, but also legitimately questioned why her big brother keeps inserting himself into Zoey’s life. Zoey, meanwhile, chased after Aaron, but to no avail. She even stopped by his place, but he wasn’t home, and then she spotted his surprise: He had gotten Charlie to give her an internship completion certificate.

Wow. So that’s why he didn’t want Zoey to take Luca’s job offer. Does this mean #TeamZaaron is no more? And did a desperate and amorous Ana really sleep with Vivek? Yikes. Season 4B is going to be lit!

What do you think of grown-ish Season 4 and its midseason finale? And are you hoping Zoey and Aaron can patch things up before it’s too late? Grade the season so far, and drop your thoughts in the comments.