Heading into Thursday’s grand finale of RuPaul’s Drag Race All Stars 6, about 39 percent of TVLine readers believed that Kylie Sonique Love would end the hour with a scepter in hand. So, how did that prediction turn out? Drumroll please…

But no one can say that Kylie’s competitors didn’t put up a damn good fight. For the competition’s final maxi challenge, the four remaining queens — Kylie, Eureka, Ginger Minj and Ra’Jah O’Hara — recorded and performed their own verses for RuPaul and Tanya Tucker’s new power anthem “This Is Our Country.”

It was pretty much everything you could ask of a RuPaul country jam — campy outfits, shirtless cowboys and a hook that’s guaranteed to burrow its way into your patriotic ears. (It’s no “Bing Bang Bong,” mind you, but it’ll suffice.)

The queens’ final runway looks were also *chef’s kiss* perfection. Eureka borrowed Ra’Jah’s signature color, turning heads in a purple Bob Mackie-inspired gown fit for the 1986 Oscars; Ginger gave us edgy ’50s housewife realness in a colorful twist on a classic concept; Kylie strutted out in a sexy red-white-and-blue number that aimed to reclaim the American flag as “something we can all be proud of”; and Ra’Jah absolutely served in a stunning purple gown with a slit up to high heaven.

But even after the performances and runway walks, RuPaul couldn’t make up her mind, instead requesting that all four queens lip sync for their lives one last time… individually! [Cue thunder.] First of all, Lady Gaga’s “Stupid Love” was an inspired choice for this final lip sync. Whoever suggested it deserves a raise. As for the queens, every single one of them left everything they had on that damn floor. They all took it in completely unique directions — some sexy, others silly — but they all set out to remind us exactly what they’re capable of, and they succeeded.

Real talk: Any of one of these queens could have won, and I would have been A-OK with it. I may have rolled my eyes (just a bit) at the tie between Trinity and Monet in All Stars 4, but looking at these finalists performing one last time, I was ready for Ru to give us a four-way tie here. Again, I can’t stress it enough — this was a phenomenal Top 4, and it was truly anyone’s game until the bitter end. 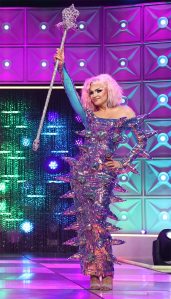 But a winner had to be crowned. And as we said earlier, that winner turned out to be none other than the comeback queen herself, Ms. Kylie Sonique Love. (Honestly, Kylie deserved this for the sole fact that she turned what could have been a messy tumble into a graceful somersault during that lip sync. Talented beyond words!)

“I’ve been waiting for this moment for 11 f–ing years!” Kylie said after taking the crown. “I found myself through drag. It’s been my saving grace. Winning this title is just reassurance that I followed the right path.”

She also had to do a bit of understandable self-pinching, saying, “Bitch, I’m not dreaming? This is really happening. It feels so good, and it feels so right.”

Your thoughts on our new reigning All Star? Drop a comment with your reaction to Kylie’s victory below.